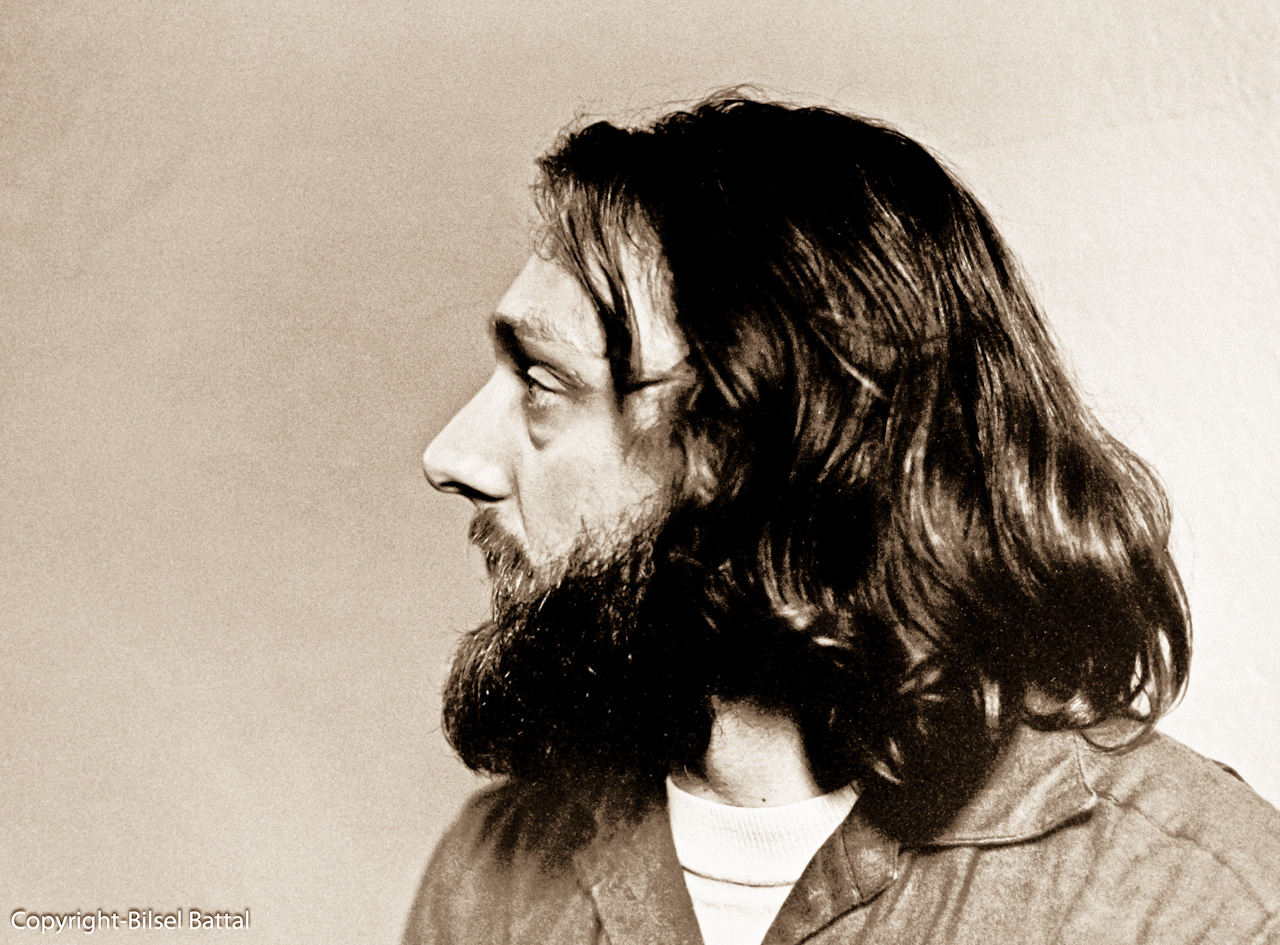 Malcolm Le Grice is coming this year to the festival, and to realize how important occasion this is, we only need to read these words written by Jonas Mekas in The Village Voice. Two film programs, a master class and a unique performance and multi-projection evening, that we will be able to experience in a few days. But let Jonas speak.
Malcolm Le Grice’s White Field Duration (20 minutes) is one of the important works I saw in London. I have also to state here clearly that I find Malcolm Le Grice by far the most important film artist working today in England, or maybe even in Europe. His work is serious, inspired and inspiring, original, and very very beautiful. His work is formal and direct and deals with the basic capabilities of cinema. Almost all of it is in the multiple projection area and I think he’s the most important artist who has worked with multiple projections yet. This particular piece is two-‘screen’ projection. The first five minutes the screens are practically clear white. During the next five minutes, we begin to see tiny, unimposing scratches moving across the screens. The scratches obviously were placed there, but they also could be taken for dust by some. For the next five minutes or so both screens flicker lightly and softly and
there are images (‘screens’) of different grey (white) intensities within the larger images (or screens). During the last five minutes or so slight traces of some representational imagery begin to be barely visible on both screens, and then the screens blank out again. It is a very pure, a very classical piece. Since Le Grice is a major artist working in the film medium today and since his work is not known in New York, I’ll give space to Le Grice himself to speak about some of his ideas:
‘AII of my work as a filmmaker, except for one or two films, has involved non-standard projection facilities, the simplest of which has been double projection, 16mm, side-by-side. This inconvenience of method intention has meant that most of my work is not easily distributed or screened, and I have had to present almost all of the shows of my work, traveling with it and organizing the machinery. There is in this probably some partially conscious motive, the films determining that I must be present at their screening. I have become increasingly concerned with the actuality of the projection situation (the only tangible point of existential reality for the audience), making it the PRIMARY basis of experience and meaning. It has occurred to me that it is useful to distinguish between an epistemological, and a phenomenological approach to film (though both concepts must be understood as linguistic contrivances with strictly limited application to EXPERIENCE, far more complex than is available to the convenience of verbal categorization). Epistemological concern leads to the use of models/concepts derived from linguistics, and the attempt to isolate out codes and their elements (Metz). The problem with this approach is that it relies on (or encourages, in spite of some disclaimers by Metz) the acceptance of the historic cinematic culture as its basis for analysis. The rejection of almost all aspects of the prevalent cinematic culture by myself and most of the current avant-garde, post-underground film-makers, has made the phenomenological alternative more attractive. In a sense, the re-invention of cinema from SCRATCH … or at least from celluloid, projector lamp, light, screen, duration, shadow, emulsion, and scratch. The two alternatives are not, in fact, exclusive: there can be an epistemological approach to the modulations from the phenomenological base … however, I am not interested in an academic “understanding”, which I view as a subtle means for the destruction of experience and consideration. I am only interested in the PROCESS of action-on (making) and the PROCESS of active experience in relationship-to (viewing). Both are ongoing and in constant flux, the meaning or effect of a work undergoing constant modification (and constantly modifying), in its passage through the world. The notion of “fixity of meaning” for a work, somehow held within it as an essence, is an illusion encouraged by our cultural habits of passive awareness. I am interested in transformation, the modes and qualities thereof and in creation —the bringing about of unpredictable events which existed nowhere before their realization.”
The Village Voice, 27 September 1973
* * * 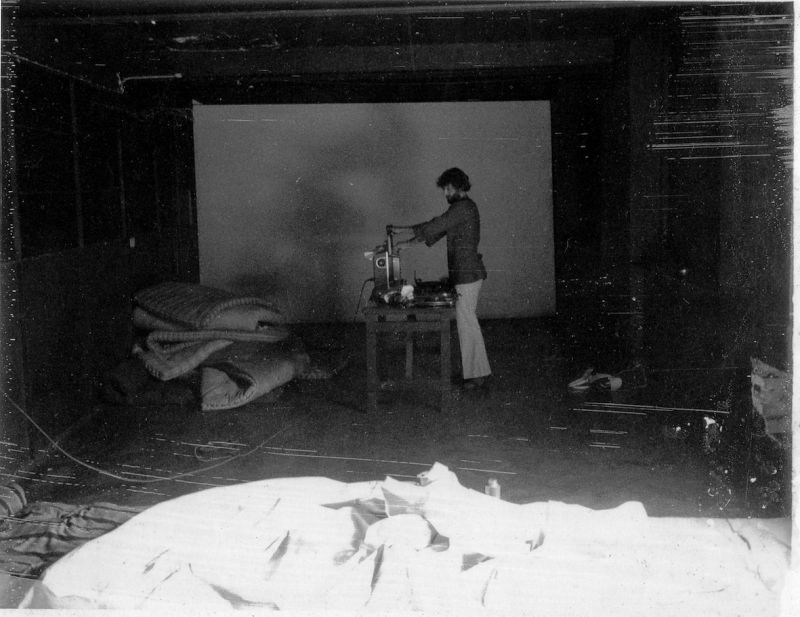 Malcolm Le Grice, on whose work I wrote extensively in my report from London last September, was in New York and presented his work at Millennium April 20 and 21.
Le Grice ‘s work in cinema ranges from ‘straight’ one-screen one-projector films to multiple screen projections which he calls ‘durations’ and which he projects for specific time lengths, to multiple screen projections which he calls ‘installations’ and which he projects for unlimited time lengths, usually in gallery situations, and to structural and conceptional live participation pieces.
Whatever the form, all his work seems to focus on the self-referential aspects of cinema, on the tools, the materials, and the processes of cinema. This, of course, was explored in this country extensively from 1960 to 1965. But Le Grice looks at it all from the formal, post-structural perspective. Take, for instance, the projector. One of the earliest instances where the projector was brought into action and I still remember it vividly was Ray Wisniewski’s performance with the hand-held projectors at the old Cinematheque. He used the projectors the way an action painter might use his brushes. Le Grice uses them very formally and very intellectually in order to gain different image and screen structures during the projection. He uses screens the same way. If George Landow could be credited for exploring the ‘thingness’ of the film strip itself. so Le Grice is using the properties of the screen and the properties of the projector more intensively and more dynamically than anyone else I know —with, of course, the obvious and unique exception of Harry Smith. LeGrice, like Harry Smith in his early projections, uses the single, regular shape screen image only as the beginning point, the beginning norm. From there on he builds and weaves with multiple screen structures which contract and expand to all four sides; or they overlap, or they work together to produce dynamic usually colour field-images.
Even when Le Grice uses images taken from life, his films do not betray any memory, and employ a minimum of illusion. It’s all structure, all very abstract, all centering on the process of making the images that we see, on the tools, materials, the components. It is an abstract cinema, no doubt —but it makes for a very sensual experience. It is sensual in the sense that we experience light and materials that are very sensuous —at least they are so to me. For instance, I find few sounds that I’ve heard in my life to contain more sensuous sonority than the sound of the six 16mm projectors running simultaneously, loaded with loops. I listened to the sound, and it was like the ocean, and it was like rain splashing on the roof, and it was like wind in leaves, and it was like six projectors running with six loops. The sound was deep, rich, full, very pleasant, very sensuous, and very good for the mind and for the body.
Anyway, Le Grice came and went, and I hope he’ll be back again, because his work deals with important aesthetic issues, deals vitally with film language, and should be widely seen. On the other hand, the only way to really see and experience his work is to see Malcolm Le Grice himself, doing it all. That makes him less packageable than film artists who can simply ship their films to you – but not much less so than, say, the work of Jasper Johns (to whom LeGrice pays tribute as one of his early inspirations), whose work must be first assembled in order to be presented in a one-man show and thus can only be in one place at any given time, and not in two places. There are other film artists whose work can be really seen and experienced only with the artist present, and thus are neither packageable nor exportable. I have in mind artists like Jack Smith or Jerry Joffen.
The Village Voice, 2 May 1974