Desbordamientos: Invasion of the film performances 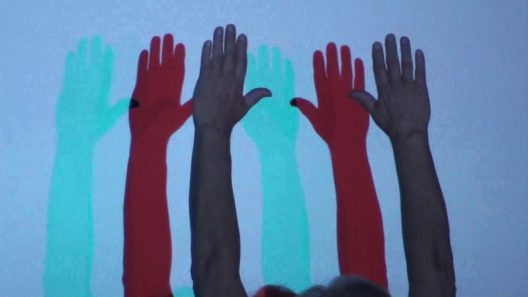 If there’s something that has characterized the (S8) since its first edition, it is the presence of expanded cinema and film performances. Back in the days of our first edition in the Old Prison of A Coruña, Bruce McClure visited us: one of the most fabulous (and overflowing in more than one sense) figures of this field. “Desbordamientos” (the translation of the term would be “overflowings”) it’s the name that we gave to this section of our program, that occupies the nights in the Fundación Luis Seoane. This name is a homage to one of our heroes: the unique Spanish cinemist José Val del Omar. Inventor, poet and mystic man, than invented more than 70 years ago the desbordamiento apanorámico, a projection that overflowed the cinema screen surrounding the audience, and that was multiplied thanks to the sound system he figured out, his particular version of the stereo: the diaphonic sound. 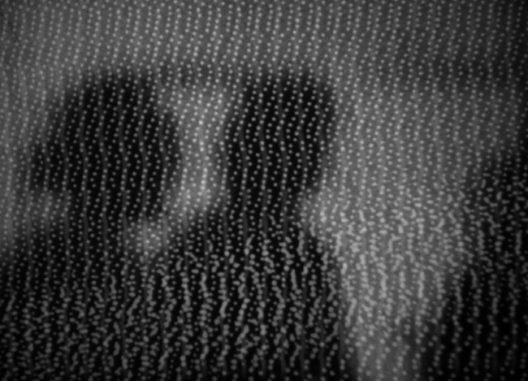 We start on Thursday night with Prismáticas (Pilar Monsell y Aitziber Olaskoaga) presentation. They will bring us the results of the second BAICC residence (organized by the (S8) along with AC/E and the LIFT in Toronto): their project: SEWING MACHINE PRINCIPLE. It is the first prototype of a projection that is also a sewing machine. A work that brings to the foreground women’s manual labour in history, their precarious and invisible work in the textile and cinematographic industries. That very night the italian artist based in Paris Stefano Canapa visits us, along with the musician Antoine Birot, bringing his performance Wavelength. In Canapa’s work the sound mechanisms of cinema, and their image in the cinema screen, are vital. In this pulsating performance, Canapa runs four 16mm projectors, which image is manipulated through a device created from cathodic tubes (the ones of the old TV sets). 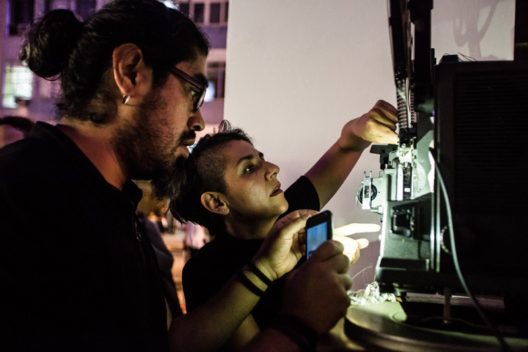 On Friday’s night, Mexico comes to A Coruña through Elena Pardo, Morris Manuel Trujillo and Azucena Losana, members of the Laboratorio Experimental de Cine, an important focus in Mexico City for arts hybridation and analog cinema experiments. They bring us two performances: on the one hand, Love Machine, that foregrounds the beautiful (and mesmerizing) functioning of cinema machines. On the other hand, Desaparecer, that takes a political motive, the disappearances of people in the Mexican territory, and transforms it in pure power in 16mm. Both performance will be accompanied by the improvisation of the Galician musicians Alexandre Losada and Luis Garrido, in a creative bridge between both continents. Losada and Garrido are improvised music, electroacoustic experimentation and wild rock militants. They use in their shows devices such as old record players, homemade synths, saxophones, guitar, cassette tapes, radios and contact microphones.
On Saturday, we will live a historic event in A Coruña: one of expanded cinema pioneers will bring back into life two seminal performances that he created in the 60s and 70s. Works that were a breaking point, rethinking the creative and active possibilities of the projection as a unique event. So we will have the chance to behold Castle 1, in which a brechtian light bulb wakes us up from our passive audience role, and Horror Film 1, in which the minimum units of cinema, the light of three cinema projectors, and the body of the artist that comes into play in surprising conjunction. We will also see the 16mm double projection of the classic Berlin Horse (with Brian Eno’s music) and the triple projection of the overwhelming Threshold, two important works in which cinema expands beyond the traditional frame.
But this does not end here. In this edition, the performances will overflow beyond the Luis Seoane towards the Sala (S8) PALEXCO: Charlotte Pryce’s magic lantern will be functioning on Thursday and Friday, generating experiences from another world. On Saturday Jeannette Muñoz, in her cine lecture, will welcome us inside her delicate performative event, Proceso hacia una película. And on Sunday the Mexican based in Buenos Aires Azucena Losana will bring us three small super 8 found footage performances. On addition, the program devoted to LEC filmmakers and to Madi Piller will also overflow the limits of the screen, through analog double projection. A 10th edition overflood and overflowing, that rocks to the sound of the film projectors roaring.