7 Limbos: The Secret Cults of Noise 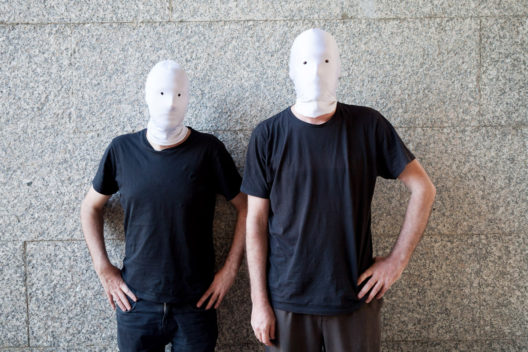 As for the final audio track of the film, is it the exact result of what happened during the shooting, I mean, the performance itself, or did you add some extras in the post-production phase?
Berio Molina: You mean the audio track that plays when the credits are shown?
Alexandre Cancelo: I think she means the final master. All the audio work –the editing, the design.
Berio Molina: I see. I understand you want to know whether it was mainly created in post-production or if we kept the raw sounds we recorded. Well, it actually depends on the chapter. For example, there is this chapter where they are hanging in the mines, in Casaio –we see the remains of the ruins, and they are hanging. Most of the audio track in that scene is made with recordings of the natural sounds that could be heard in that place. However, to build this idea that something was collapsing, we created a composition by putting together a number of sounds of falling objects. That was made in the post-production phase. However, the falling objects were recorded in that very place, and the sounds we hear are not alien to the ruins in any way.
Alexandre Cancelo: We put a lot of work in the sound production. There are a lot of layers to it, it certainly was a thorough effort.
Berio Molina: Yes, there are two moments where… The scenes of the whale and the mallet… There is a lot post-production work in there. In the mallet scene, many aspects of sound are considered: how it can manipulate reality, or the fact that it can be a potential acoustic weapon, as is the case with ship sirens, which call for the passengers when the ship is about leave; or with bells, which indicate us how manage our use of time… The character wielding the mallet alters the city, but he also alters the editing. He makes the sounds move from one shot to another. He hits the soundscape, and suddenly makes it move from the background to the foreground. This is a character that hits the editing so that sound travels among shots.
Alexandre Cancelo: Also, sound can have this ability to… reveal us, to reveal our manipulation of the film in some of its parts. It can reveal the people behind the camera, make them apparent… in the same way that it can reveal the people in front of the lens.
We are now at a festival where analogue cinema is given a major role. I’d like to know more about the role of analogue cinema in your film, as it appears to be very present in your prologue, in the ending, and also in your portraits of the artists.
Alexandre Cancelo: Yes, it was a way to materialize our wish to bring together different points of view, different ways of seeing. It was an idea that was of the original plan. It somehow made it to this point and eventually adopted this form. It was this idea that a ghost was watching us from outside, watching the creation of the film, like a ghost watching all the other ghosts. And it eventually took this shape. We didn’t want to be too literal, and this is not an aspect that we’ve especially wanted to highlight, but it’s true that we explicitly used the format with the aim to provide a contrast with the 4K format, so digital and highly defined. We thought of it as a way of identifying and showing the array of directions that the film can take.