Here we reproduce a fragment of Jonas Mekas’s Film Diaries on the fundamental Marie Menken, in the occasion of the special tribute we dedicate to Mekas: a selection of films by the artists he supported through his writing and programming. 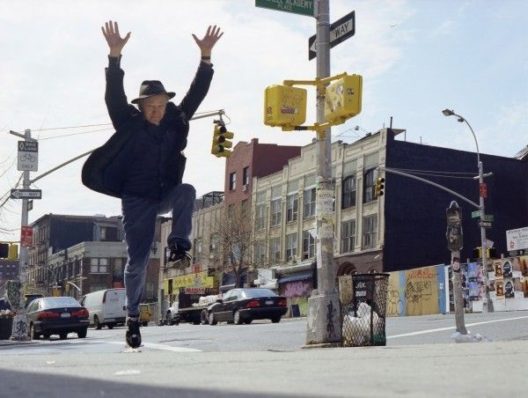 January 4, 1962
I shall begin the year by praising the poet.
The Marie Menken retrospective last week at the Charles Theatre was an important event for all those who care about cinema. I didn’t see any of the daily or weekly film critics at the screening; I never see them at any important screening of experimental or poetic works. Archer Winsten, the only critic who came, walked out on Menken after the first two films. The
pleasure was left entirely to the audience. The audience is more ready to learn and to explore the unknown than our critics.
The work of Marie Menken, as presented at the Charles, was consistently poetic and consistently good. Four of her films, Arabesque, Bagatelle, Notebook, Glimpse of the Garden, must be counted among the best that can be found in film poetry today. Film poetry has gone through several historical periods. There was the French avant- garde: Cocteau, the symbolic- Surrealist period; there was the American experimental period of the 40’s: Maya Deren, Harrington, Anger, Maas— mythology, Freudian symbolism; Brakhage and Menken represent the spearhead of the third period, a fi lm poetry free of obvious symbolism and artistic or literary influences, a poetry where the filmic syntax achieves a spontaneous fluidity and where the images are truly like words that appear and disappear and repeat themselves as they create clusters and blotches of visual meanings, impressions.
The work of Marie Menken is the opposite of prose (drama, episode, story) film. There are works of fiction which contain poetry; but there is no good poetry, and particularly no good lyrical poetry, that contains prose— and Marie Menken is a lyrical poet. The structure of Menken’s filmic sentences, her movements, and her rhythms are those of poetry. She
transposes reality into poetry. It’s through poetry that Menken reveals to us the subtle aspects of reality, the mysteries of the world and the mysteries of her own soul.
Menken sings. Her lens is focused on the physical world, but she sees it through a poetic temperament and with an intensified sensitivity. She catches the bits and fragments of the world around her and organizes them into aesthetic unities which communicate to us. Her filmic language and her imagery are crisp, clear, wondrous. There are moments in Arabesque and in Notebook that are among the most inspired sentences in filmic poetry.
Does Menken transpose reality? Or condense it? Or does she, simply, go direct to the essence of it? Isn’t poetry more realistic than any realism?
The realist sees only the front of a building, the outlines, a street, a tree.Menken sees in them the motion of time and eye. She sees the motions of heart in a tree. She sees through them and beyond them. She retains a visual memory of all that she sees. She re- creates moments of observation, of meditation, reflection, wonderment. A rain that she sees, a tender rain, becomes the memory of all rains she ever saw; a garden that she sees becomes a memory of all gardens, all color, all perfume, all midsummer and sun.
What is poetry? An exalted experience? An emotion that dances? A spearhead into the heart of man? We are invited to a communion, we break our wills, we dissolve ourselves into the flow of her images, we experience admittance into the sanctuary of Menken’s soul. We sit in silence and we take part in her secret thoughts, admirations, ecstasies, and we become more beautiful ourselves. She puts a smile in our hearts. She saves us from our own ugliness. That’s what poetry does, that’s what Menken does. 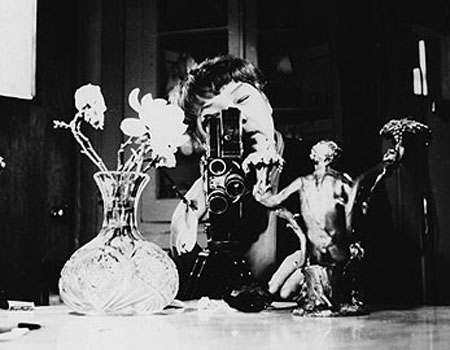 There are poets who are only beginning to sing. You see their clumsy sentences, vague or muddy imagery, unsure movements. Gropingly, searchingly they move across the screen. Marie Menken’s work is evenly finished and mature. There are very few unfinished or unsure lines in her language. The ten films shown at the Charles represent the work of her life, and this work, these sixty minutes, place her together with the very best of our contemporary poetic cinema.
“True poetry can sometimes be acceptable to the mass of the people when it disguises itself as something else. But, in general, ours is a civilization in which the very word ‘poetry’ evokes a hostile snigger or, at best, the sort of frozen disgust that most people feel when they hear the word ‘God.’ ”
— George Orwell.