Prismáticas. Threading as a Political Gesture 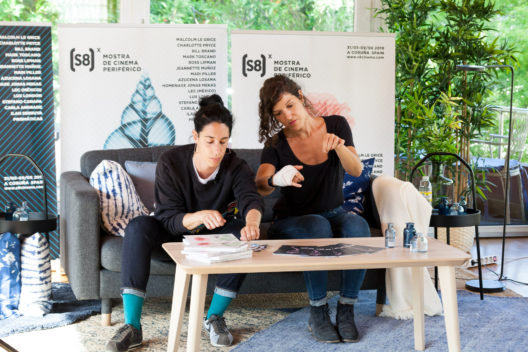 Our interview with Prismáticas –an art collective founded by the Spanish artists Pilar Monsell and Aitziber Olaskoaga– starts with a performance involving a replication of the gestures that are put into action when using a sewing machine and a cinema projector. This is part of the Sewing Machine Principle, where a connection is established between factory work and the invisible effort of workers (usually women) in the largest cinema and textile industries.
Could you talk a little bit about the gestures that you just performed for the camera?
P.M.: We’ve just performed something that is the result of the work and the explorations that we’ve been developing for the latest months, and which led us to discover that the gestures related to the sewing machine and those involved in using a cinema projector are actually very similar. The project was born from an insight I had while hearing certain sounds in a collective lab that I visit sometimes to work on my projects. There were a group of people who owned a sewing machine, and one day they were using it, and I kept hearing the sounds it made, those particular noises. And, since I’m used to work with projectors, I soon realised that the noises that came out of these two machines were almost identical.
That idea stayed with me, and later on, I was reading Kluge’s Cinema Stories, and there was one called “The Three Machines that Make Up Cinema”, and one of them was about the sewing machine principle, that is, to the fact that one of this mechanisms was actually the origin of the Lumière brothers Cinématographe. That’s when I called Aitziber and told her I had an idea that we could develop together, because she’s a projectionist. We’d been friends for a while, and were already working together on other projects, so that’s how this collaboration started.
A.O.: Yes, like she said, we started exploring and testing, putting the two machines in relation, and comparing them, and we kept finding more and more similarities. Not only in the gestures they involve, but also in their mechanics, the noises they make, a common vocabulary: threading the film, threading the thread…
P.M.: Yes, all that relies on the same mechanism. Also, the shutter –the mechanisms who work by circular dragging movements and that trigger the activity of the device are in the same place in both the projector and the sewing machine.
What was the process for creating a prototype of the machine during your BAICC art residency?
A.O.: I remember thinking, when I got to Toronto… Oh, God, this is so abstract, and I need to go back to Spain with something I can touch and use and put in suitcase! And I was lucky to meet two wonderful people who were working in the field of electronics, programming, they’re activists, to… We started working together and we collaborated in the making of this project for about five weeks. The brought many ideas to the project, and thanks to them, we were able to make this machine.
P.M.: Yes, because we had outlined our idea together. We were trying to combine some of the parts and components of a sewing machine with several parts of a projector, and we wanted their functions to mingle together, at least some of them. We definitely wanted to use the sewing machine pedal for activating the projector. That was key.
A.O.: When I arrived to LIFT I was able to borrow a Singer projector (the same brand that’s well-known for making sewing machines!). They let me experiment with it, because it didn’t work anymore –that’s what they said. But we discovered that it actually worked, so, together with my collaborator Phil, I started emptying it to the max, so it became portable and I could bring it to Spain. Because it was a huge device, and it even had a specific part for magnetic sound, so it had two arms for film, and two extra arms intended for magnetic sound. We changed the original engine for a smaller and lighter one. We definitely needed to make it as light as possible… So we started adding electronic parts to it, a couple of Arduinos… We took off the lightbulb and installed a led instead (which quite hard work), and we eventually were able to make the pedal work the way we wanted.