Azucena Losana. Do It Yourself

Interviews
Azucena Losana. Do It Yourself
7 June, 2019 by editorialweb in Interviews 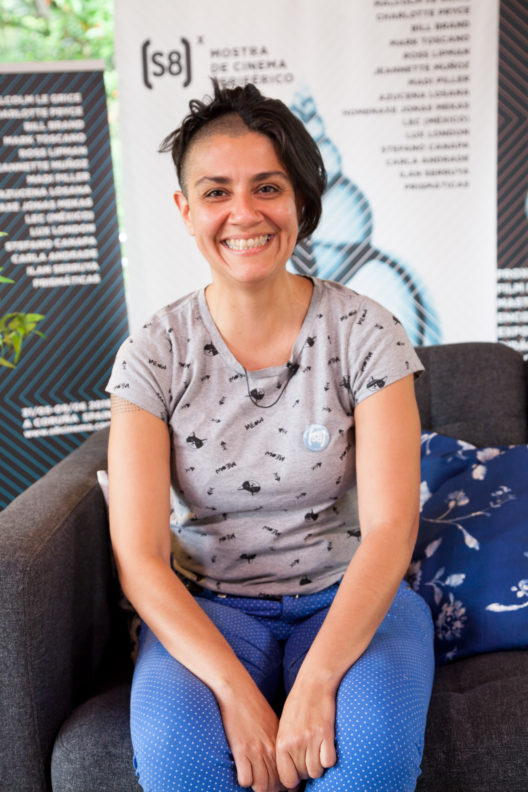 How did you start working with analogue media, more precisely with super 8?
I started working with analogue formats in Mexico, with La Trinchera, an art collective that later led to the foundation of LEC with Morris Trujillo and Elena Pardo. We mainly developed art collaborations that had to do with expanded cinema using analogue projectors. I started using a retro-projector in combination with a number of objects. Then I went to Buenos Aires to continue my studies, and I met a bunch of people who were working with super 8 film, like Claudio Caldini, who offered me my first camera. So, in addition to working on live no-camera performances, I started filming. In Argentina there is this big art scene around super 8, with its own schools and trends, like filming everything in one take, editing directly with the camera… We worked a lot in black and white, saving reel… that kind of things. After participating in a residency I learned how to develop film, and I started working at a famous lab in Buenos Aires, Arcoiris super 8. It actually is a small commercial lab, but it’s well known by analogue independent filmmakers because it’s the only lab in the region that remained open after all the laboratories in South America were forced to cease their activities. Then, on the side of filming and working with objects, I started developing, and all those different interests began to take a common direction. I also discovered 16 mm film, and began to explore it as another way for experimentation and intervention. At the same time, being in contact with other artists of the same scene led us to build a collaboration network –we set up a number of spaces for showing our films, like Cinema Cínico, which has now become an itinerant “movie theatre”. Those activities were always halfway between the underground and the institutional world: one day we put a film show at a museum, and the day after we were showing at a private house, with precarious means. Buenos Aires certainly was an incredible opportunity to be in contact and experience the independent scene and its ways.

For the selection of your works that we’ll be showing here, we’ve chosen the title Anthropology and Archaeology, because we feel that your cinema has a lot to do with opening, with traveling, with approaching people… Do you agree with that?
Yes, I actually loved that title and I feel it really represents what I do. When I worked with video I was interested in documentary: approaching people, places… I’m especially fascinated by people who have very specific professions, workplaces, tools. And when I travel, I like to look for places that are unique, places that you wouldn’t be able to find anywhere else. In Buenos Aires I’ve been working (even though it’s still a work in progress) on a piece about people who work with light. I call it Los bichos de luz (The Light Bugs). It’s actually one of the short films that we’ll be watching here, about Daniel Vicino, who is our guru: he’s the only person in the region that knows how to fix cameras, projectors… and he has everything, every device, every tool, all in the same place. I’m also filming César, who works with neon lights –a job that was very important in Buenos Aires but that has become less and less valued and that is resisting somehow. And there are other places that I’ve been finding in Buenos Aires, very particular places that are like unique time tunnels that exist only there. This is something that really attracts me.

Your approach to Berlin, for example, has nothing to do with your project about São Paulo.
Yes, that’s true. I think that relates to the way people move in each different place. I’m certainly interested in being a spectator of that. The speed at which someone moves in São Paulo is quite different from that of someone living in Rio de Janeiro, for example. I like creating this pieces about the pace of people and cities.

Working with archive, with found images, is also very present in your work –I’m thinking about your film Gardel. How do you approach archival footage?
Yes, working at the laboratory and with archival footage has become increasingly important to me over the last years. To begin with, Buenos Aires is a city where it’s really easy to find film. That was also a way to make it less expensive. There are also a lot of people who are interested in intervening film, but not in filming. And in this context I’ve been able to find incredible works, wonderful pieces, sometimes in a flea market, or in the trash… This led me to broaden my perspective, and encouraged to me to creating my own archive. I also developed an interest in approaching archival work from a more theoretical and methodical point of view, particularly because I’m currently working at the Embassy of Mexico in Argentina, and we found incredible films that had been forgotten for thirty or forty years. This led me to conceive archival footage not only as something I could intervene and use for my art projects, but also as heritage that needs to be preserved. An Embassy is a very particular place, because the authorities keep changing all the time… but we still find incredible films, we design programs, etc. Actually, the performance I’m going to present here in collaboration with LEC was inspired by some footage I found in a coffee factory in Costa Rica, and which acted as a trigger for a number of similar ideas that Morris, Elena, and I were sharing about machines and what they represent. And here we are now, the three of us together, presenting this piece.

You’ve also created installations, collage works, drawings… Can you talk a little bit about your other activities?
The installations, for example, have to do with my photo collages –all of them are about precarious machines. This is something that started when I was collaborating with La Trinchera and we were using projectors made with cardboard, lightbulbs, and primitive electronic devices. When I left for Buenos Aires, I went to college to study electronic art and new media. We mixed versatile technologies with small engines, and combined them with objects that could be manipulated with electronics. That’s when I started making installations. Drawing and collage were more of a serial work. I have this series on Argentinian TV –I used to draw while the TV was on, and the subtitles too, and I started drawing what was happening on TV, which were always crazy things. As for my collage works, they’re made from damaged found photographs that I discovered in the trash.

New Dates: the (S8) Will Take Place from September 27 to October 3rd

Ana Domínguez and Ángel Rueda. Ten Years of a Utopia