Sala (S8) Porto | Thursday June 2nd | 6 p.m. | Free entry to all venues until full capacity. It will not be possible to enter the venues after the screening has started. 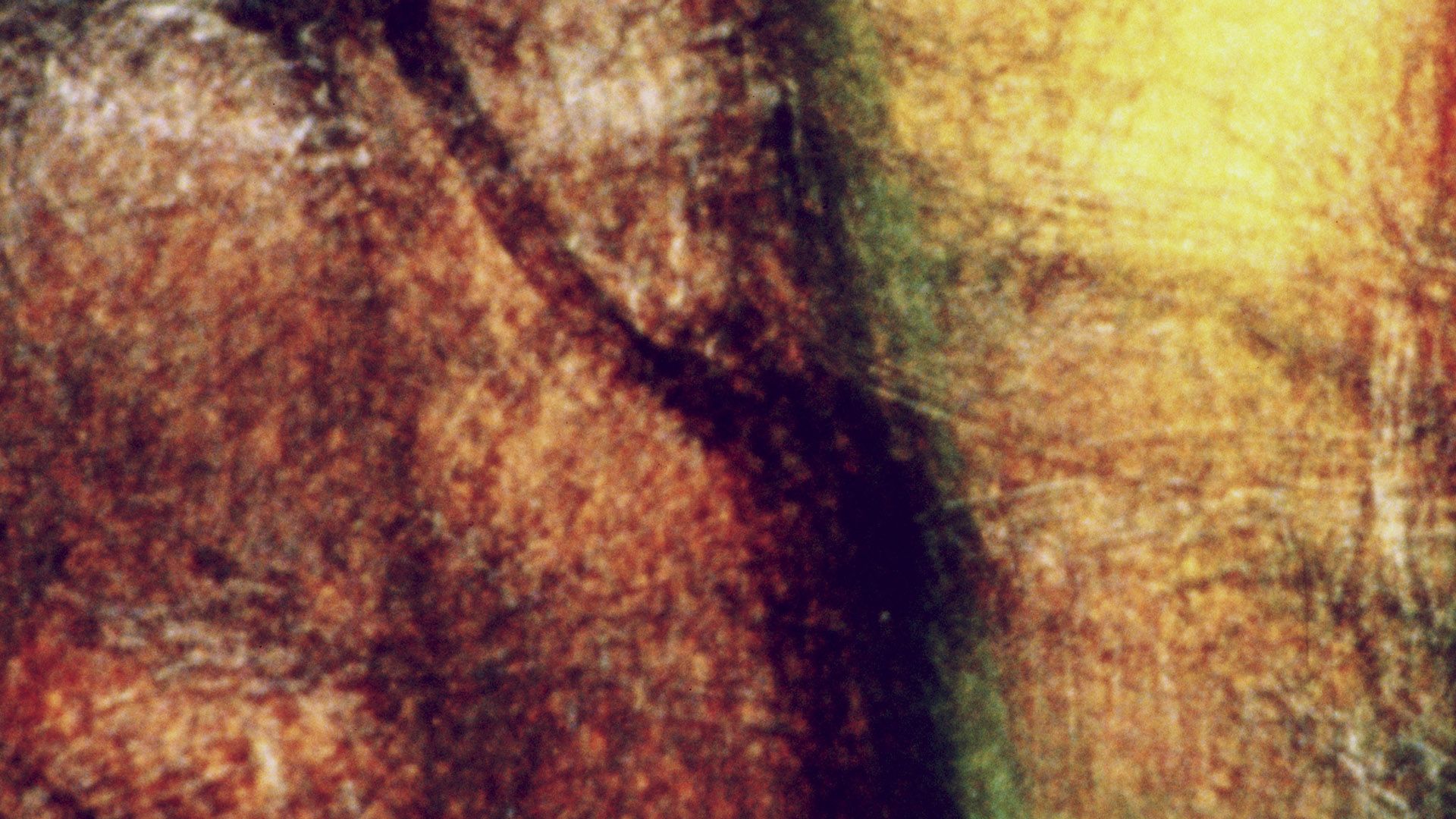 This is the first part of the scènes de ménage series, in which the figure in the frame is Larose’s own father, Jacques Larose. It was shot in super 8 and 16mm, later enlarged to 35mm, and alternates between colour and black and white. The action is simple, but is the result of complex work with layers: a man opens a window onto a wooded landscape. The autumnal colours give way in a cross-fade to black and white; the exterior and the interior become confused; the particles of the film slide across the screen, scattering the light from what is real. 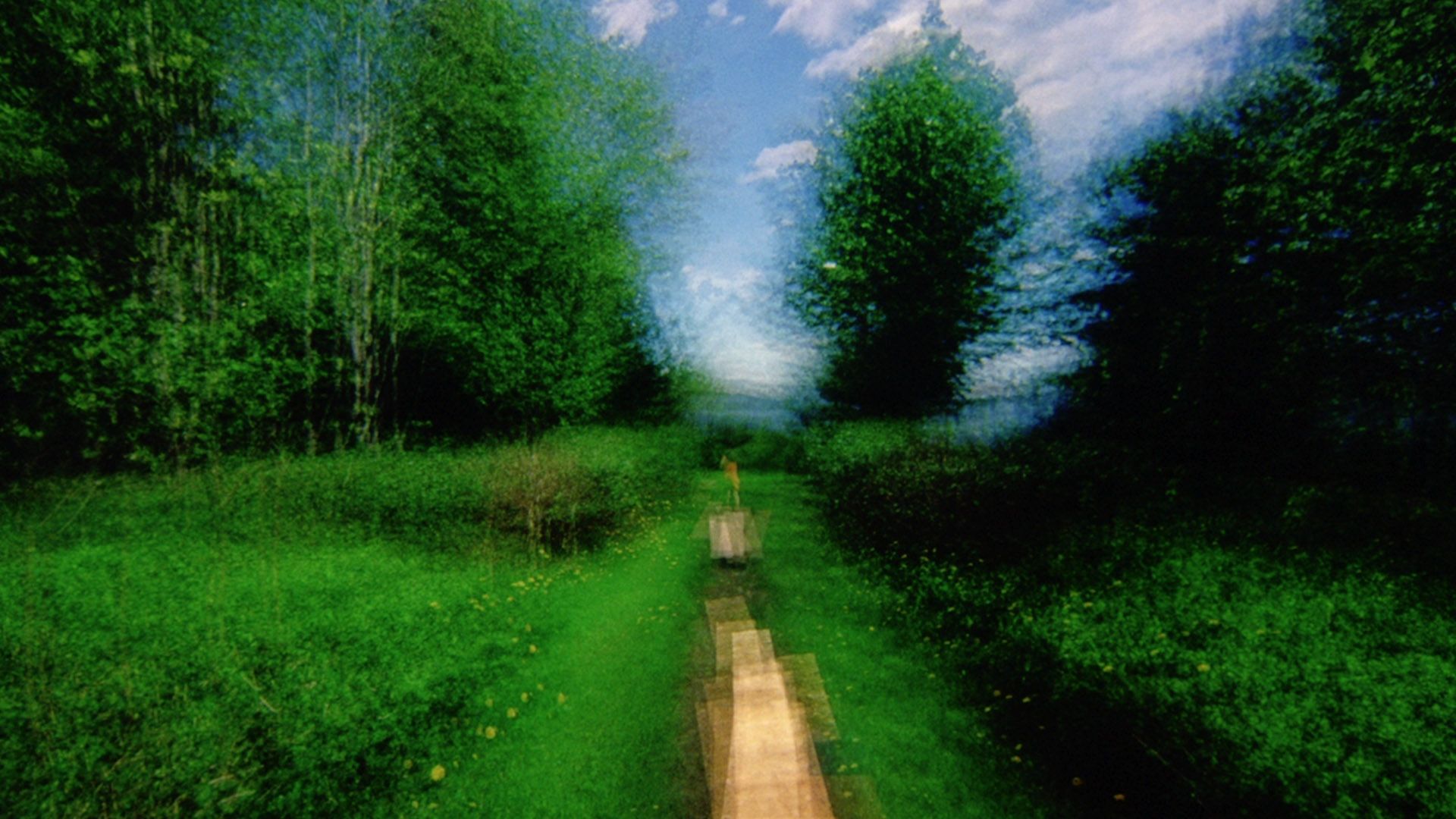 The brouillard series is based on Larose’s journey on foot, the camera on his shoulder, from his parents’ house to a nearby lake. It is a path repeated in successive overlapping layers, shot with a minimum aperture on 35mm reversal film. The small variations in the path, one on top of another, give rise to a pointillist or impressionist-looking landscape when stacked over each other, which seems to dissolve and recompose itself, and across which ghostly shadows of people sometimes pass by. It is a mechanical and photochemical process prone to the vibrant randomness of human locomotion. 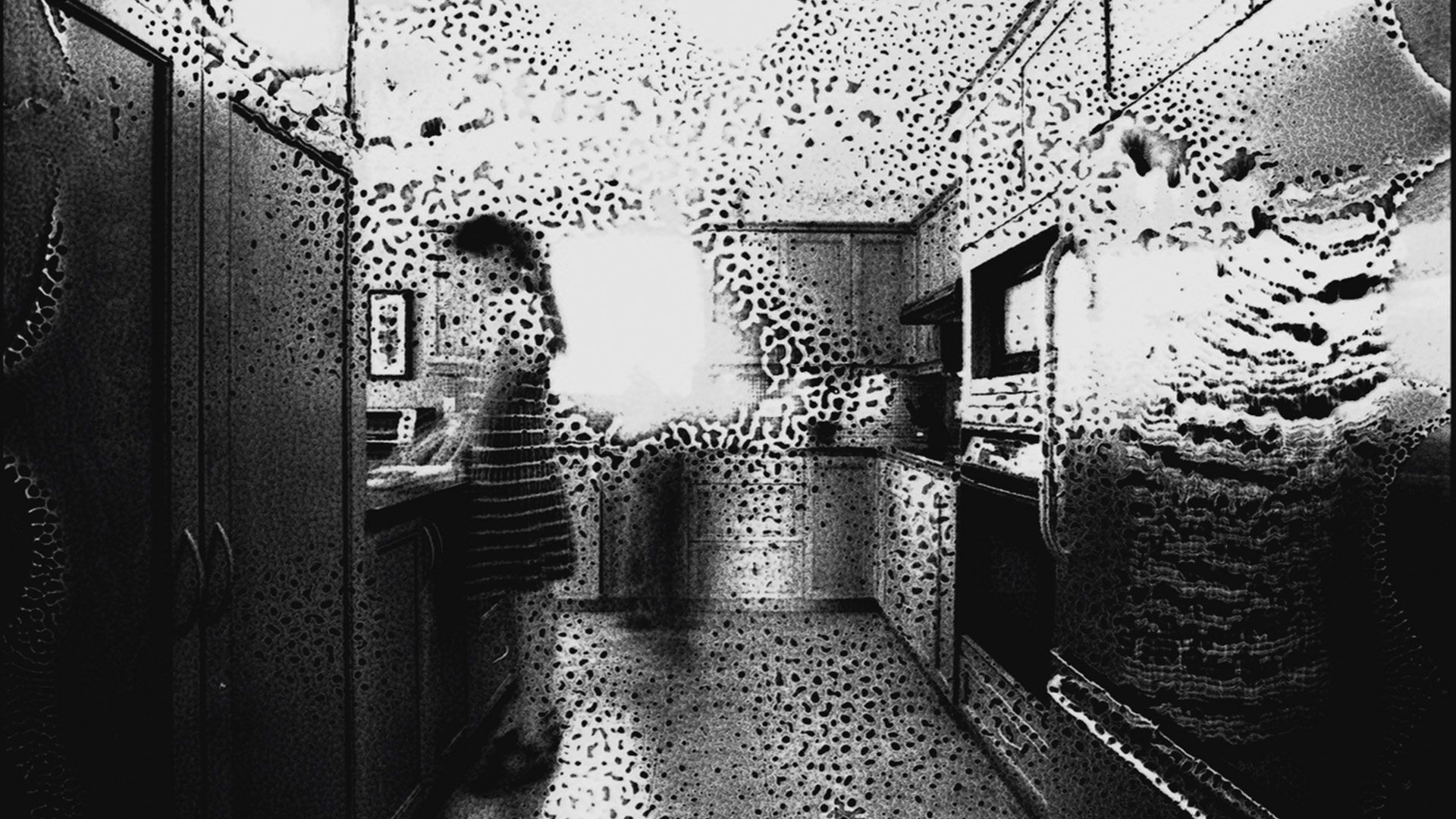 This is a trio of studies from the scènes de menage series, starring Jacques Larose and Marie Claude Ferland, the filmmaker’s parents. We see domestic activities that take on a new dimension thanks to the way Larose deals with successive layers. The repetitive, automatic movements that are repeated in places such as the kitchen and the hallway, the succession of actions of getting into the car and leaving the house, are all captured by the camera in multiple overlays, which on being slightly out of sync give rise to a split, multidimensional reality. 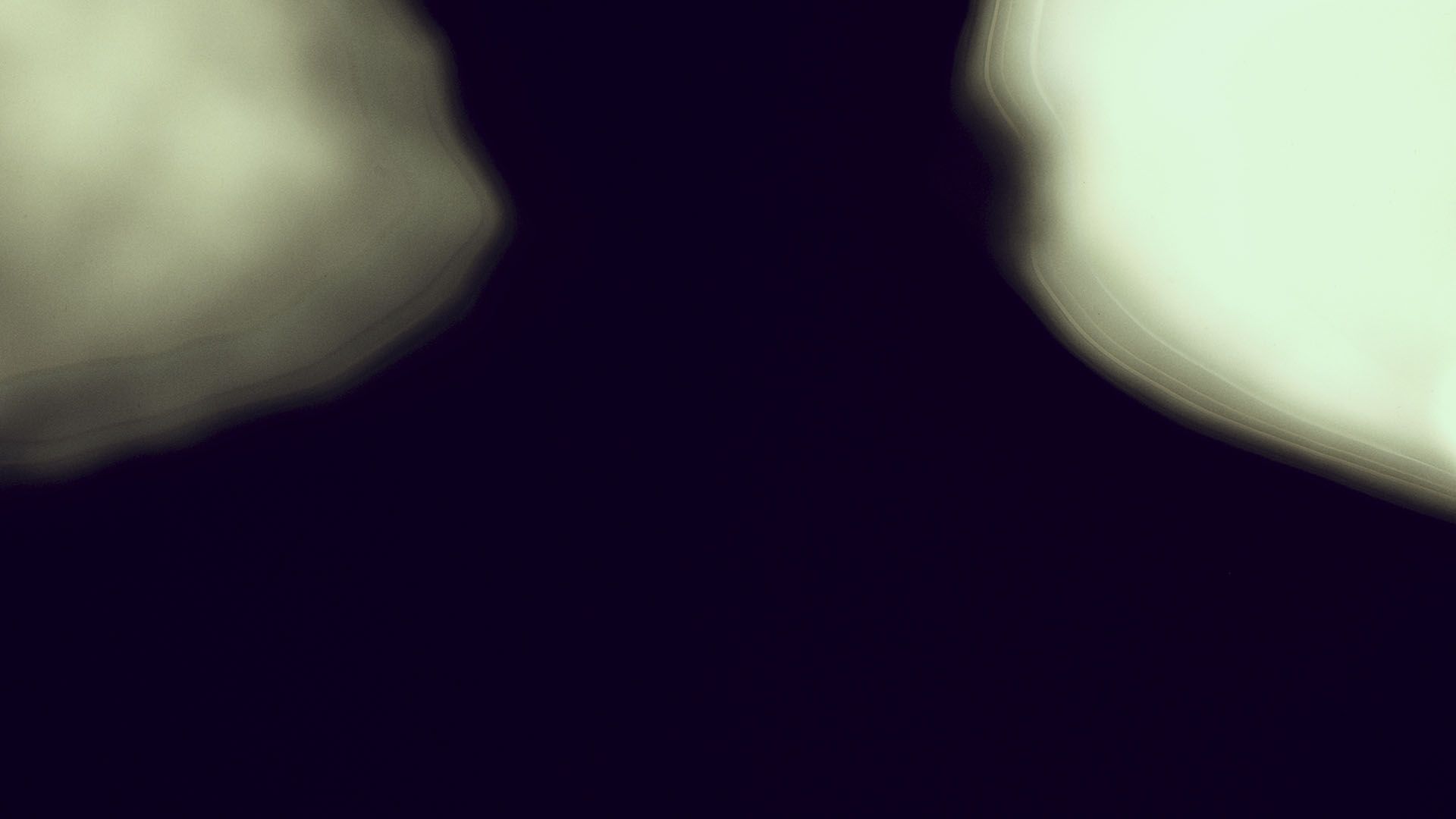 In this third part of the scènes de ménage, the work with movement and in-camera overlays intensifies. Figures move towards and away from the camera, with a swiping hand or a turning head taking on a gentle, volatile quality. Larose articulates a story with different sequences in which domestic interiors alternate with exterior vegetation, in a film that seems to emerge from the depths of photochemical emulsion, and which plays at times with its grainy texture.

The idea of something eternal casts aside the linear concept of time: the one that says that life is a succession of moments—past, present and future—in relentless, crushing progress. The eternal return speaks of the value of the moment, more than a simple transition: each moment is unique and eternal; it is the full meaning of all existence and an affirmation of life. This is a philosophical concept that seems to be at the heart of the Canadian Alexandre Larose’s filmmaking, in which the concentration of all moments into one, and an insistence on gestures, paths and motifs, is essential. Variations on the same motif and serial work make up the backbone of his work, which combines a certain scientific meticulousness with outcomes of staggering plasticity and evocative power. It is an exploration of the medium of photochemical cinema and its possibilities which, like the moments he captures in his films, seems to know no end. And it goes beyond a simple formal or plastic conception, plunging its roots into the personal: from memory to dreams, to everyday life and the significant transit through the familiar places that determine our lives.

Born in Lebel-sur-Quévillon, Quebec, Larose first graduated with a degree in Mechanical Engineering, subsequently turning to education in filmmaking. His scientific background has in some way influenced his work as a filmmaker, underneath which there lies a meticulous methodology of trial and error that is turned into a series of developments on the same motif based on a deep understanding of the phenomena it is made up of. Larose also mentions music as one of the pillars on which his work rests: his experience as a drummer thus determines his use of rhythmic patterns and repetitions that make up a greater whole.

The tour of his filmography we are proposing is split into two blocks. One of them deals with his early works, along with what was to become his first major serial project: Ville Marie, concerning the first skyscraper built in the city of Montreal. The session opens with 930 (2006), which sets out from a childhood memory: at the age of ten, during a summer camp, Larose went through the railway tunnel that takes up the leading role in the film. Twelve years later, he returned to the location with the idea of filming that tunnel with his friend Ludovic Boily. With him, he conceived a dolly on which the camera ran along the train tracks, especially designed to be able to film that sequence. Even so, some of the footage was shot with a handheld camera due to the poor state of the tracks. It was dangerous filming, as trains were still running through the tunnel, and it bore barely 150 feet of 16 mm footage: no more than two and a half minutes. By using an optical printer and contact printing, Larose began to re-work the footage and multiply it in a process of trial, error and learning. The result is a film that shifts the real image towards abstraction, with the use of highly contrasted black and white, and frame-by-frame positive-negative inversion work, which occasionally also evokes Roscharch tests thanks to a deliberately sought symmetry. Larose thus enters into a genealogical line of filmmakers, heading towards the abstraction of motifs in the later work with the image in the optical printer, in a generative, structural work like that of the pioneers the from the London Film-Makers Co-op (Crosswaite, Eatherley, Le Grice) and filmmakers like J.J. Murphy, Dana Plays and others.

The symmetry of 930 refers to the concentric movement in Artificers (2007), a film in which the Super 8 camera turns about the axis of its lens, generating trails of light thanks to long exposures. Once more it was necessary to build a device, for which Larose again collaborated with Ludovic Boily in what was also to become a serial work.

Ville-Marie represents the definitive immersion into this way of working, in a series in which each variation shows a new evolutionary step based on the previous one. As we mentioned, the starting point is Place Ville Marie, a building constructed in Montreal in 1962. Larose’s fascination with its architecture (it is a building with a cross-shaped floor plan and a shining aluminum structure with black windows) within the context of the big city then overlapped with a recurring dream in which the filmmaker was falling from the top of a skyscraper, looking upwards. As Larose explains, Ville-Marie began in 2005 with a series of pixelations in which he simulated upward and downward motions, constructed frame by frame, playing with the geometry of the building. That is where La Grande Dame (étude) (2011) began—la grande dame is the building’s nickname among the citizens of Montreal. At the same time, he began to experiment, once again together with Boily, using devices with which he was able to make a camera fall from the building and keep it facing upwards during the fall. Larose chose a Super 8 camera for this, not only because it was lightweight, but also because the Super 8 cartridge is light-tight, so even if the camera were destroyed, the images would survive. Ville Marie – A (2009) is the result of the work with this device in different buildings in the city (curiously, none of which are Place Ville Marie, since he did not manage to get the necessary permits). The film works with the images in different sections, sifted through high contrasts with the use of colour filters, abstracting the image. This is also where the path sets out on a multiplication of images in the form of a mosaic. Finally, and in collaboration with the aerodynamic engineer Idriss Ammara in creating a new falling device, he managed to film in the emblematic building. That is where the works Ville Marie – B (chute #9b) and Ville Marie – B (mosaïque #3) come from, both from 2013, in which he intensifies some of the motifs with which he had begun to work such as the mosaic, and also the layered work with the optical printer. The work itself with this device, and the deterioration of the footage as it got used and re-used, also adds alterations and new effects to a work that has been built up based upon the insistence and rethinking of the motifs, movements and compositions of the original material, without casting aside the randomness of what happened during the process. The serial work with Ville-Marie ends in a four-screen installation, this time working digitally.

Rue de la Montagne (2012) works in some way as a springboard towards his next two serial projects, based on overprinting but this time made with a camera. This is how the brouillard series began, in which he experimented with multiple exhibitions (sometimes up to several dozen) on the same journey. Larose moves along the same path, camera in hand: from a summer house to a small jetty on a lake. It is at his parents’ house next to Lake Saint-Charles in Quebec. The successive overprints straddle one another, the same path being repeated but always with small variations of organic movement that generate a series of trails, a light that seems to be scattered, creating a sort of impressionist painting in motion. It is a gesture with many sensory and emotional implications; many moments concentrated into one.

Larose is currently working on the series scènes de ménage, in which he again takes up the idea of brouillard applied to everyday gestures. This time it is not the camera that moves, but what is in front of it. The “models” are his own relatives, especially his father, doing everyday activities. The concentration on the human body and its gestures, and with an automatic, routine repetition, adds new dimensions to Larose’s layered work. Pieces like le vestibule (2015), la cuisine (2015) and au canadian tire (2014) express this idea, which is refined in its progression in films such as I and III. (2022). They are films that acquire an almost existential, philosophical dimension that appeal to life, the passage of time and routines, and which are powerfully reminiscent of that vital moment in an eternal return, a concentrated, infinite present that traps us within the impressive photochemical expression that is built, layer by layer and variation by variation, by Alexandre Larose.