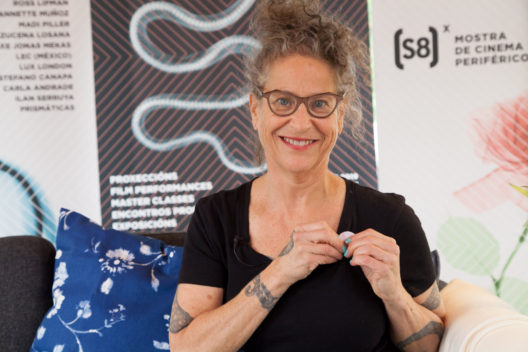 Even though it might be a weary thing to say, programming is more than bringing films together and showing them. Over the ten years of life of this festival, one of the things that has left a mark on us is the close link that we develop with the filmmakers. For months, we engage in long-distance conversations in order to fix every detail, and when finally meet each other in person it’s like seeing the face of a pen pal for the first time, or bumping into an old acquaintance. That’s why those who visited us in the past are always present in one way or another, and many times the moments spent with some of our filmmaker friends seep into our conversations.
Because of this –and also because we don’t think that having dedicated a solo program to an artists should mean our doors are closed to following the evolution of their work– our relationship with the filmmakers has continued to grow, and has grown stronger through our thematic programs of the recent editions. This year, for our 10th anniversary, we’ve decided to purposely design a program that’s intended to be a meeting point for –and with– those old friends, but also an invitation to look on to the future. And that gaze on to the future are the new friends, these filmmakers with which we wish to build a powerful link, in accordance with that intuition that goes hand in hand with affinity.
Our first program, entitled THE LIGHT IN THE CAMERA, reunites us with Saul Levine, who visited us in 2016, and who still is a guiding figure in ethic and aesthetic terms. All his works were made with a super 8 camera –today, we rediscover it with a new chapter of his Light Licks, a series that is dedicated to the light that, coming from different places, fills the screen. In addition to this, new generations of filmmakers are invited to the gathering: the Venezuelan artist Valentina Alvarado, who looks for light where it doesn’t exist –in the blackouts that take place in Maracaibo, her hometown. Bruno Delgado Ramo uses the intimacy that super 8 can provide to go on a trip inside his own room –he surprises with unexpected framing, with optical illusions, with the light that travels around in a restricted space. In 2012, we dedicated The New Monster, a program on collage in animation, to Lewis Klahr and Janie Geiser, who is now back with her Fluorescent Girl: a found image, a reflection, an image that clings to the eye and won’t let go. This program has a friend in the distance: Robert Todd. We look forward to getting to know better his work on 16mm on the possibilities of light and the 16 camera.
Our second program LINES AND TRAJECTORIES brings back some of our new impressionists of 2016, from a new perspective where movement, real or virtual, is crucial. We’ll have Dan Browne’s Lines of Force, the colourful and beautiful gesture of the Parisian fountains signed by Stephen Broomer (who visited us in 2017, too), and the glitch impressionism of Jacques Perconte, who joined us to present a performance and an installation. Jodie Mack is back, too –since her visit in 2014, she has been present almost every year through her prolific and boundless animated imagery. Malena Szlam, who in 2014 shared with us her Lunar Almanac, included in the Media City program, is also back to take us on an incredible journey to the Chilean landscape with her breathtaking piece Altiplano. We’ve also brought back our beloved Naomi Uman, who left a deep mark in A Coruña in 2012 through her solo program and the workshop she offered. Now she is back with two works in progress: one illustrates her most humanist approaches (animalist, in this case), and the other shows her interventions on found footage. Last, but not least, we’ve welcomed two new but already loved friends: Jeanette Muñoz, who shared with us her project Puchuncaví (a place that’s many places, a place that’s an idea), and Stefano Canapa, whose experimentation with sound in analogue cinema draws lines on the screen –lines that reflect a reaction to the optic sound signals.