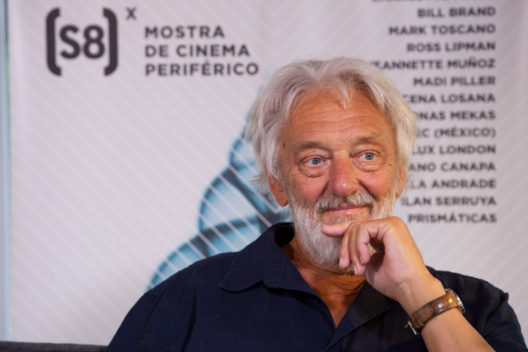 The Co-op + Creating & Exhibiting Art
My background, my influences were not from film, from cinema. I mean, I knew cinema very well, and in London, as a student, I saw all the Godard, Antonioni… the new-wave, and the supposed advanced cinema, but I wasn’t so interested in that kind of cinema. My influences all came from painting, sculpture, music, particularly from jazz. I started as a painter, so when I started to get interested in film, I wanted a more direct relationship. The first film that I made, Castle 1, I had to do it through the commercial laboratory. It was found footage, stuff that I picked up from the rubbish bins. But in order to print it, it had to go through a commercial laboratory, and it’s an expensive business. And I didn’t feel like I was in control, as I was as a painter. With film, the traditional way of doing it is you write a script, you shoot it, and you put it together, and then you give it to the laboratory to work. So you don’t handle it, you’re not in control of the whole process, so it’s not really organic. And for me, one of the big important things is, through my interest in jazz and painting is improvisation. You start something but you don’t know where you’re going to end. And by having control over the printing and development you’ve got that organic process. So, particularly in the case of the films that I made in that time, I had no idea what the end was going to be. Berlin Horse is a good example. I shot my original material on 8 mm, in Germany. I happened to see it and I just shot it, with no particular intention. We were touring in Germany for a film show. When I got back to England from that trip, I had like one hour of material, and the only thing I found interesting was that shot, about a minute of this horse being exercised. So I projected the 8 mm and with the 16 mm camera I was copying it in black and white from the screen. I didn’t know where this was going, I was just doing it, bonding with what I could see. I developed that, took it to the co-op printer, and printed the positive and the negative on top of each other. And then I looked at the material that came out of there, and decided to put some colour filters on it, and started superimposing the lots. And also I remembered that I had reel material from Edison of the horse from the barn. So, really all I’m saying is that at the beginning I didn’t know anything of how it would look like. And it’s a process that’s completely different to anything you could do working through the commercial cinema.
Improvisation, Cinema and Performance
My interpretation is that my first film was a very Dadaist attack on cinema. It was very aggressive, it had a flashing lightbulb… And it was an attack on the audience, but it also was an attack on my own sensibility about cinema. In that way, it was very negative, it was breaking something in a punk kind of way. But I realised I couldn’t carry on by simply doing negative things. At some point I started to experiment with double projections. It interested me because the audience always needs to be doing little choices: the two screens were always related to each other, and one of them would go a little out of time… one would go into colour, one into black and white… And theoretically, what I was trying to do was shifting the meanings of cinema more to the process of the spectator than to the process of the maker. I didn’t begin to work with that intention, but I was always aware it had something to do with the moment in which the spectator encounters the film, not with an imaginary time and space as in narrative. Conventional cinema takes you through the screen into an imaginary past, which is narrative of time and space. With double projections, and then with live performance, I was saying to the audience: the time is here and now, not that imaginary time and space before you sat in front of the screen. And it’s your time; that time belongs to you, not to me. You sit and look at what I’m thinking (that is, the film) but it’s not a one-way communication. Later on, this would relate to my reflections on computers and interactivity, and being the protagonist in a computer game, for example. And I started thinking: is it possible for the spectator to intervene in the work?