Sala (S8) Porto | Wednesday June 1st | 4.30 p.m. | Free entry to all venues until full capacity. It will not be possible to enter the venues after the screening has started.

Frame Manoeuvres to Port is a performance proposal by Bruno Delgado Ramo that seeks to place a territorial exploration in parallel with another exploration of the projection and filming devices themselves, highlighting the framing process itself as the very frame of the film by means of a dialogue between the harbour landscapes of both Toronto and A Coruña. The project thus puts forward a more theme-based, contextualised investigation (of the ports), together with a more technical one (of the camera viewfinder and projector). In a metaphorical sense, Frame Manoeuvres to Port equates the film’s viewfinder (and the frame) to the pilotage practice area of ports (zones where only an expert, the port pilot, can manoeuvre thanks to their in-depth knowledge of those waters). Both are restricted areas where the manoeuvres take place. Along the same lines, the word manoeuvre refers both to material operations carried out with one’s hands and to the work on board a boat.

The project, which is divided into several parts, was developed at the LIFT (Liaison of Independent Filmmakers of Toronto) facilities as part of the BAICC residential studies fostered by (S8), AC/E and LIFT. 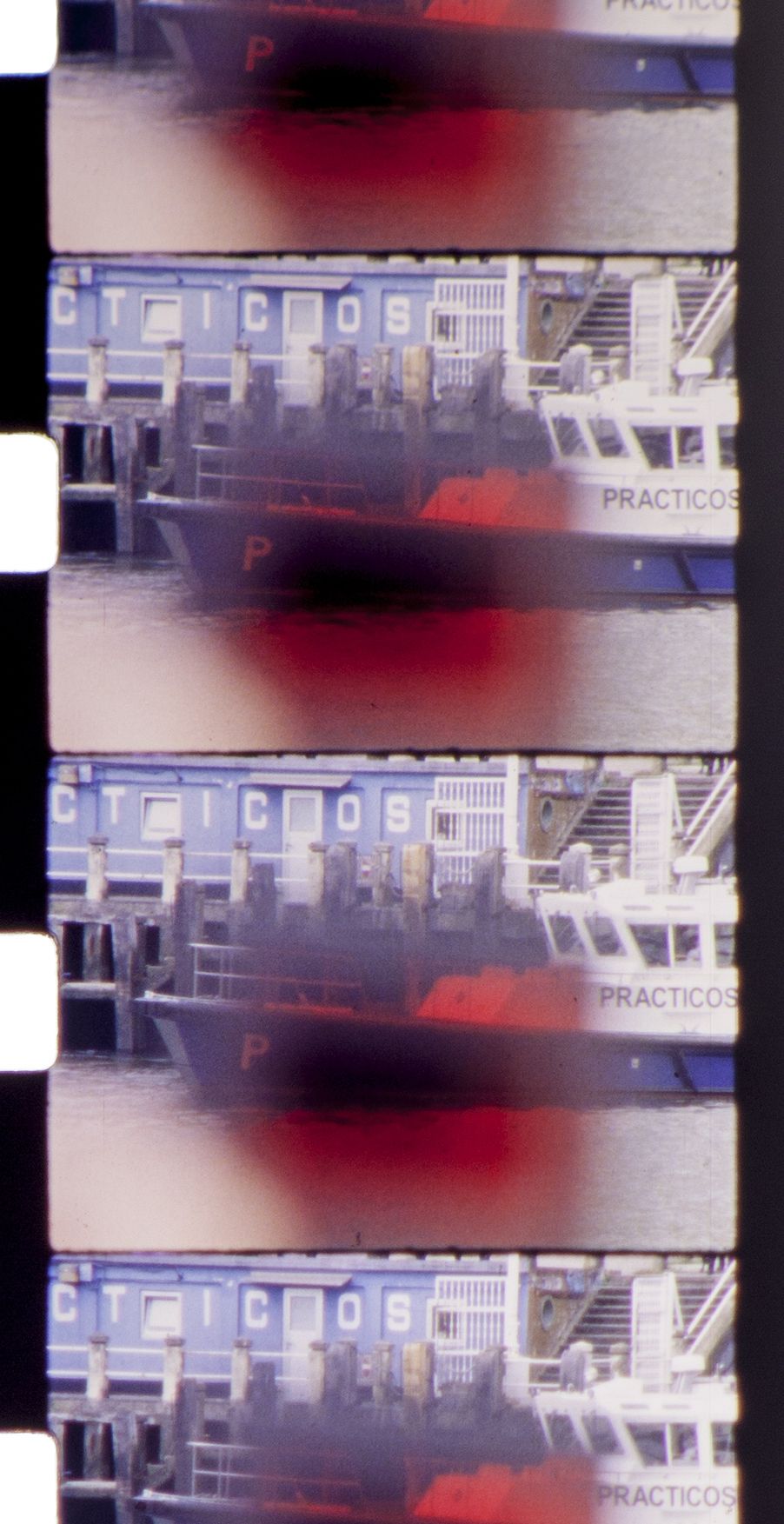 The projectionist arrives early at the projection room with the can of film. Although the chairs have not yet been laid out, the white rectangle already shines in the background. He checks its smoothness. Between one preparation and another, certain gags of the profession arise. The sun advances towards the horizon; there is increasingly less time left for the open-air screening. (Bruno Delgado Ramo)

A study on pilots and pilotage areas. The distance from which the pilotage tasks and areas are filmed gets progressively shorter, until the recordings appear during the manoeuvres with the pilots from A Coruña, and the camera is now on board. An exploration of the activity and the harbour landscape leads to a definition of a series of recurring gestures and motifs, attempting to establish correspondences between them and certain elements of cinematographic practices. Some of these recurring motifs are taken up again in the 16mm film shot in Toronto, such as the ladder over the hull of the cargo ships (for the pilot to get on board from the launch) and the act of climbing. The first (brief) approach to the pilots is filmed in Portugalete. The A Coruña films begin from a back room of Palexco (used during the Mostra festival as an office), from which some of the cargo ships that dock in A Coruña can be seen entering and leaving and, a few meters ahead, the jetty for the pilots. Then the longest block filmed from the launch begins during the pilots’ manoeuvres. (Bruno Delgado Ramo) 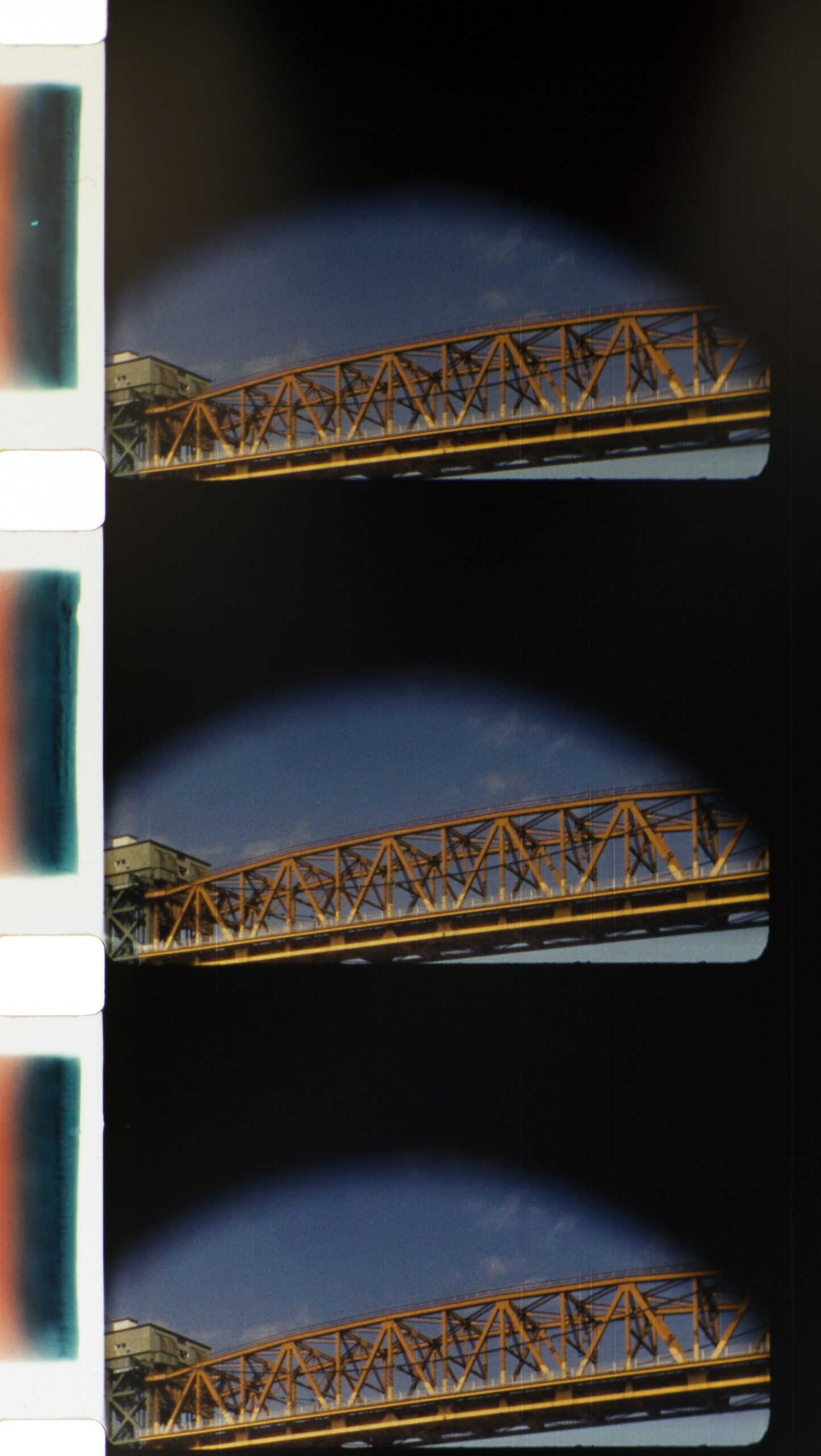 This super 8 production was made in parallel to the 16mm film and works as a series of annotations aside from the latter. The port of Toronto, a surveyor unfolding his tripod next to the bay, the Bolex viewfinder, the LIFT work table, the colour filters and a map of the port of A Coruña, a 16mm still from the film. Procedures with the Bolex are shown that could hardly have been filmed with the Bolex itself, without a second camera. I would like to point out these procedural gestures, these manoeuvres, from outside, before moving on to the 16mm film with the intention of relating them to the visual manoeuvres contained in the latter. (Bruno Delgado Ramo)

This film shifts between the studio’s editing table at LIFT and various locations on the western shore of Lake Ontario. The room used as a studio that LIFT gave me measures about 14 square metres. Inside, there is a tall editing table with rewind arms, a light table and bags for discards, a JK copier modified so as to be operated with software and a Steenbeck Moviola. I began to work there directly, impressed by the busyness of the tall editing table painted in a greenish-sky blue colour. I was interested in filming that cinematographic tool as if it were a port pilot’s tool. This idea took shape in the early days and I developed it throughout that period. It took me two weeks later to also film the old Steenbeck as if it were the bridge of a cargo ship. […] During the filming in the LIFT room, I discovered a series of manual procedures allowed by the Bolex H16 camera that interested me insofar as they could be conceived as manoeuvres that affect the construction of the frame. This meant a point of direct contact with one of the ideas in the project’s initial proposal: I carry out a series of manual manoeuvres or procedures in the camera that lead me to make precise modifications within the limits of the frame. I approached this idea by making a parallelism with the pilot’s precise work within the limits of the port area. In this sense, I am especially attracted to the “turret” of interchangeable lenses, the filter holder and the matte box bellows. […] At one point during my stay in Toronto, I manufactured a solution to fix a mirror and a pair of mirrors onto the opening of the bellows so that I could film a subject in front of the camera at the same time as fragments of the camera and my manoeuvres with it. In general, I began to carry out a study on the relationship between the manoeuvre that causes the movement and the movement itself within the frame. To do so, I considered making these manoeuvres directly, while the film was running through the viewfinder, with the aim of including the imprint of that relationship within the very act of photographing. (Bruno Delgado Ramo)