Sala (S8) Porto | Sunday June 5th | 8.30 p.m. | Free entry to all venues until full capacity. It will not be possible to enter the venues after the screening has started.

Lee Ranaldo, founder of the legendary New York noise music rock band Sonic Youth, along with the Canadian writer and visual artist Leah Singer present the performance Contre Jour, with Ranaldo providing the sound improvisation and Singer the projected images in a spectacular mise en scène with sound content intimately linked to the cinematographic form. A piece that seeks strong emotional involvement from the public, in which there are moments when the guitar remains hanging in the air, swinging in the void. An environment filled with light and sound, open to randomness and experimentation, in which the performers and the audience engage in an immersive experience. 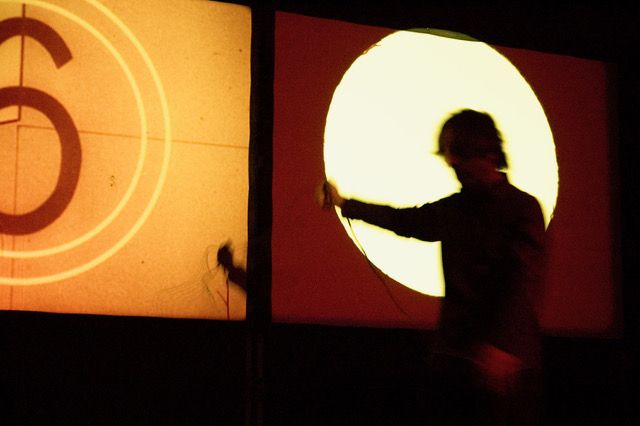 We will present the latest version of our thirty-year collaborative project, known variously as Drift, Contre Jour and Sight Unseen–titles that suggest chance encounters, shadow play and the appreciation of the overlooked.

Since 1990, we have explored how image and sound interact in a live setting. Efforts to break down traditional performer/audience dynamics led to experiments with performing in the round and setting up the projection screen on the floor at eye level, eliminating the need for a stage.

The performance invites a personal interpretation where the experiential nature of the work takes precedent over fixed exposition or any overt narrative.

In the beginning of our collaboration Leah used one, and then two 16mm modified analytical projectors that enabled the manipulation of the film and provided the opportunity to perform in tandem with live music; the film could move forward and backward, go slow and fast and stop completely in a freeze frame gaining flexibility like an improvising musician. The projectors were the instruments and Leah the performer. Just as a DJ scratches vinyl on two turntables, Leah used the projectors to juxtapose and mix films across a projection screen in real time.

The film was created in Leah’s signature style of shooting 16mm motion picture film in a still 35mm camera, abandoning 24 frames per second rhythm in favor of a fragmented form. The analyzer’s capabilities allowed for the projection of these unique camera rolls, which were very short and would fly by if projected at regular film speed. This meant a short piece of film could expand in time because it had to be projected frame-by-frame. These sequenced film vignettes, separated by black leader, create a visual score that takes on a different shape with each performance. As a result of mainly practical reasons, digital video files have now replaced analog film but the core principals of the performance remain.

The latest evolution in Lee’s performance involves ‘suspended guitar phenomena’, his electric Fender Jazzblaster guitar swinging freely through space like a sonic pendulum. Both player and instrument function as bodies to intercept the front-projected film, interacting with Leah’s constructed sequences, their shadow play on the screen an homage to the earliest form of cinema. The range of sounds emitted from the guitar, and further audio material on the film’s soundtrack create a score that does not illustrate or sync the film but rather responds to it and catalyzes it. Overall the performance poses a set of divergent possibilities that distinguish and advance our experiences–positive/negative, monochrome/color, on/off, past/present.