María Meseguer. Pictures in the Dark 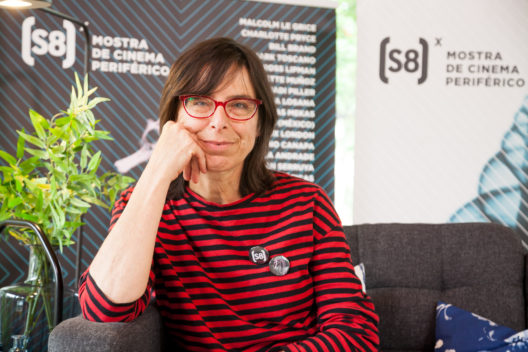 We interview photographer María Meseguer to discuss her exhibition and her new photo book 9/10 (S8) – her particular vision of the festival’s history.
The first (second) edition
I started collaborating with the festival because Ángel and Lucía Rolle, who had already met me, called me and said: “We want to you to take pictures in the dark!” And I thought “Well… let’s see what happens”. The first year I didn’t take so many pictures, I felt a bit lost, because I didn’t know anyone in the team. But I still remember really interesting people that I had the opportunity to capture, such as Guy Sherwin and his family, Zoe Beloff and her husband… It all felt like a big family in the end.
How to take pictures in the dark?
I use any light source I can find: screens, shadows, the little amount of light that might come from the screen when they change the reel, the actual light of the film that’s being projected… With that, I can manage.
Patience and portraits
Maybe patience is the most important thing. I don’t like approaching people that I don’t know. Jeannette, for example… I need to meet them first, get familiar with them, if possible. Watching their gestures, their pace. If I can, I like to follow them throughout the festival. Because sometimes, the first picture is not good, is not special. Last year, with Phil Hoffman, for example. The first picture I took of him at CGAI is just OK, not a bad picture, but it has nothing special to it. However, as we got to know each other, there was a parallel evolution in the pictures. It’s a common thing: as the festival progresses, the guests feel more comfortable, more relaxed. And that shows.
Curating a selection for 9/10 (S8)
I selected the pictures year by year, choosing the ones I preferred from each edition. Then, with a little help from David Carballal –who designed and edited the book– we reduced that first selection. I decided which ones to keep, which ones to take out… if I wasn’t sure, I discussed my choice with him. It was a process of reviewing over and over again… discovering which pictures went well together, then verifying if they worked as a whole, as a unity.
The exhibition as a visual journey
The exhibition doesn’t follow a chronological order, it’s based on the aesthetic qualities of the images, and on the visual connections that can be established between one another. I mean, it has nothing to do with the relationships the guests and the participants might have had, my choice was purely aesthetic, visual. It was like creating or reassembling a visual puzzle. I also wanted similar pictures to be together (portraits/pictures of spaces, for example) in order to keep a unity, like a visual direction.
The book
It is a small book that contains more than 120 pictures –it includes more pictures than the exhibition. I guess that David Carballal could explain it better, since he was the one in charge of editing the book. But the size of the page was already a guideline to distribute the pictures on the pages. We wanted them to be of the same height, in order to keep that continuity. It’s a two-page composition, but they still keep a continuous line.