Reunion by Ilan Serruya. A mosaic of silences 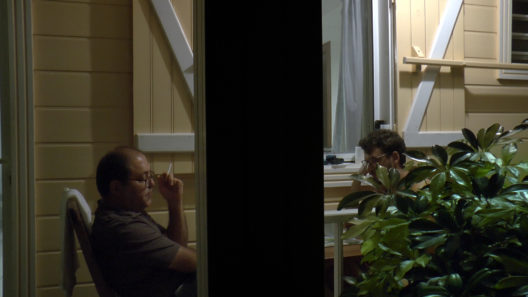 In 2018, Reunion by Ilan Serruya was among the projects selected to participate in INPUT, our program for tutoring and coaching for emergent filmmakers. Reunion is the result of a thorough research process with the aim to find formal devices that allow to express personal sensitivity through cinema. The film, which was premiered at DocLisboa in 2018, has travelled back to Coruña to be shown at (S8) this year.
Why filming on Reunion Island specifically? Was this a random thing or something intentional?
In 2015, I started working on small films using my own home-made archive. In them, I approached a number of family issues, manipulating and resignifying the images. This approach to the personal using audiovisual means had a strong impact on how I understood and processed my own history. While I was in the middle of this autobiographical process, my father moved to Reunion. I didn’t really have a relationship with my father. The name of the place led me to understand the island as an invitation to reunite with him, and it was one of the reasons that contributed to materialize this long due meeting.
I’m curious about the process of gathering the materials for the film. Did you film over a long period of time? Was it hard, filming your father?
I stayed on the island for a month, and I actually had no idea of what I was doing. I didn’t know if this could turn into a feature, a short-film, or maybe nothing. I obsessively filmed all the time we spent together, and also every corner of the island that I was given access to. The camera was always present: when we had lunch, during our trips, when we were talking… When I was alone, I would film myself.
Later on, I was able to realise that I had taken the camera with me so it could act as a mediator between us –something that would help ease the tension of our encounter. I don’t think I went there to film him –both of us were in front of the camera. Our reunion is the true main character, the main subject of the film. In that sense, the device was of major importance to the development of the encounter.
Did your idea for the film change a lot since it first came to your mind? During the editing phase, for example. Was the role of landscape something you had in mind since the very beginning?
After I finished filming, I spent more than two years trying to give shape to the project. I wanted the landscape to express the content of our silence, and this is something I knew I wanted right from the beginning. The thing is that silence actually ended up becoming the film’s backbone: during the editing phase, I chose to exclusively use the filmed scenes where we are silent. I didn’t want to wallow in our conversations about the past. Instead, I thought I’d rather focus on a present where communication is broken after years of absence and estrangement.
As a result, the landscape of the island gained more and more importance in the film, until it actually became what provides us with the time and space that are necessary to really own the story and be able to build a personal interpretation of what happened there.
Tuesday 4 June, 6:30 pm, at CGAI.