Sala (S8) Porto | Thursday June 2nd | 8 p.m. | Free entry to all venues until full capacity. It will not be possible to enter the venues after the screening has started. 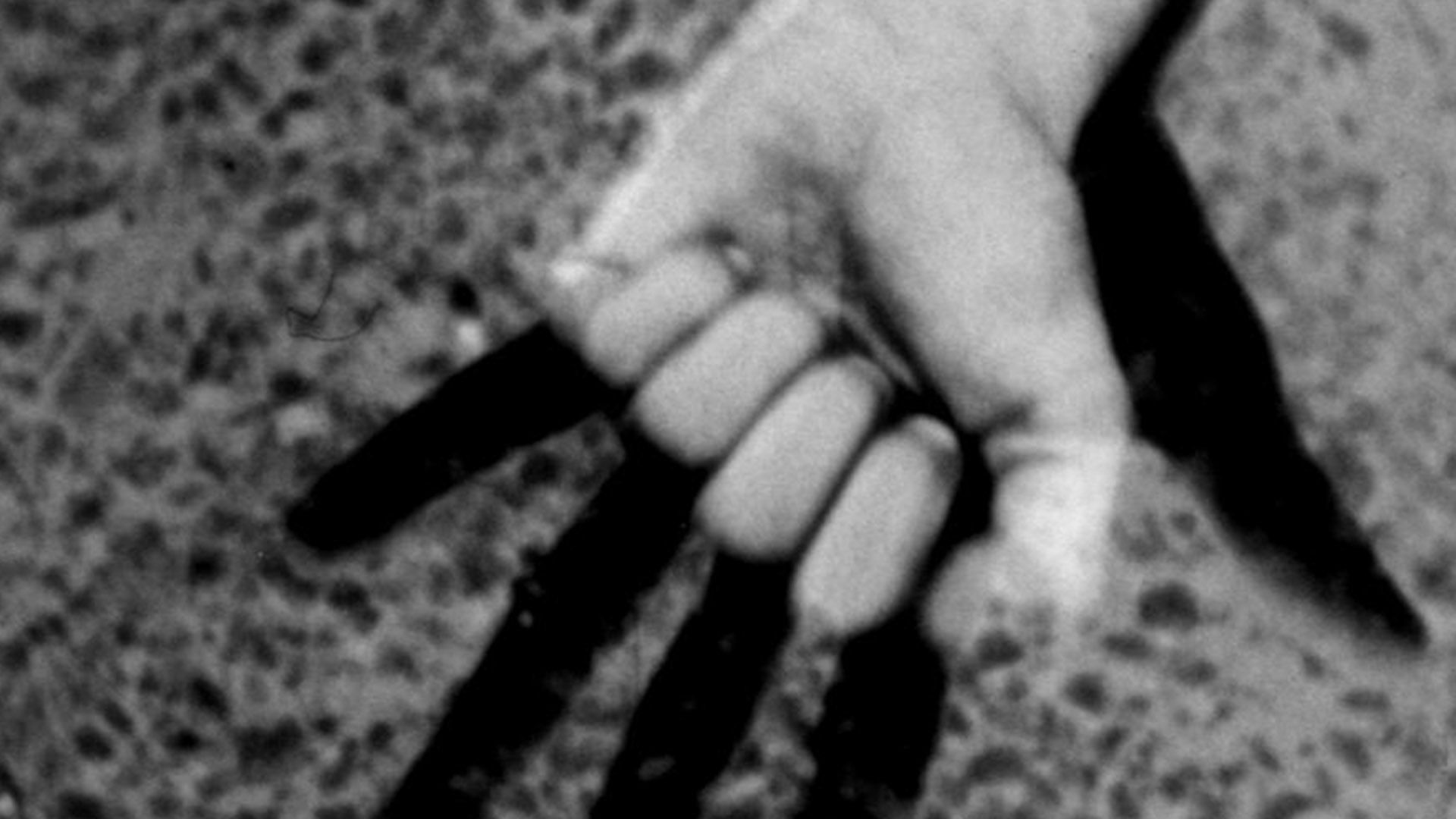 A movement study of a restless hand. Made from one five-second shot. Sound constructed from an old French folk tune played on a hand cranked music box. (Richard Tuohy) 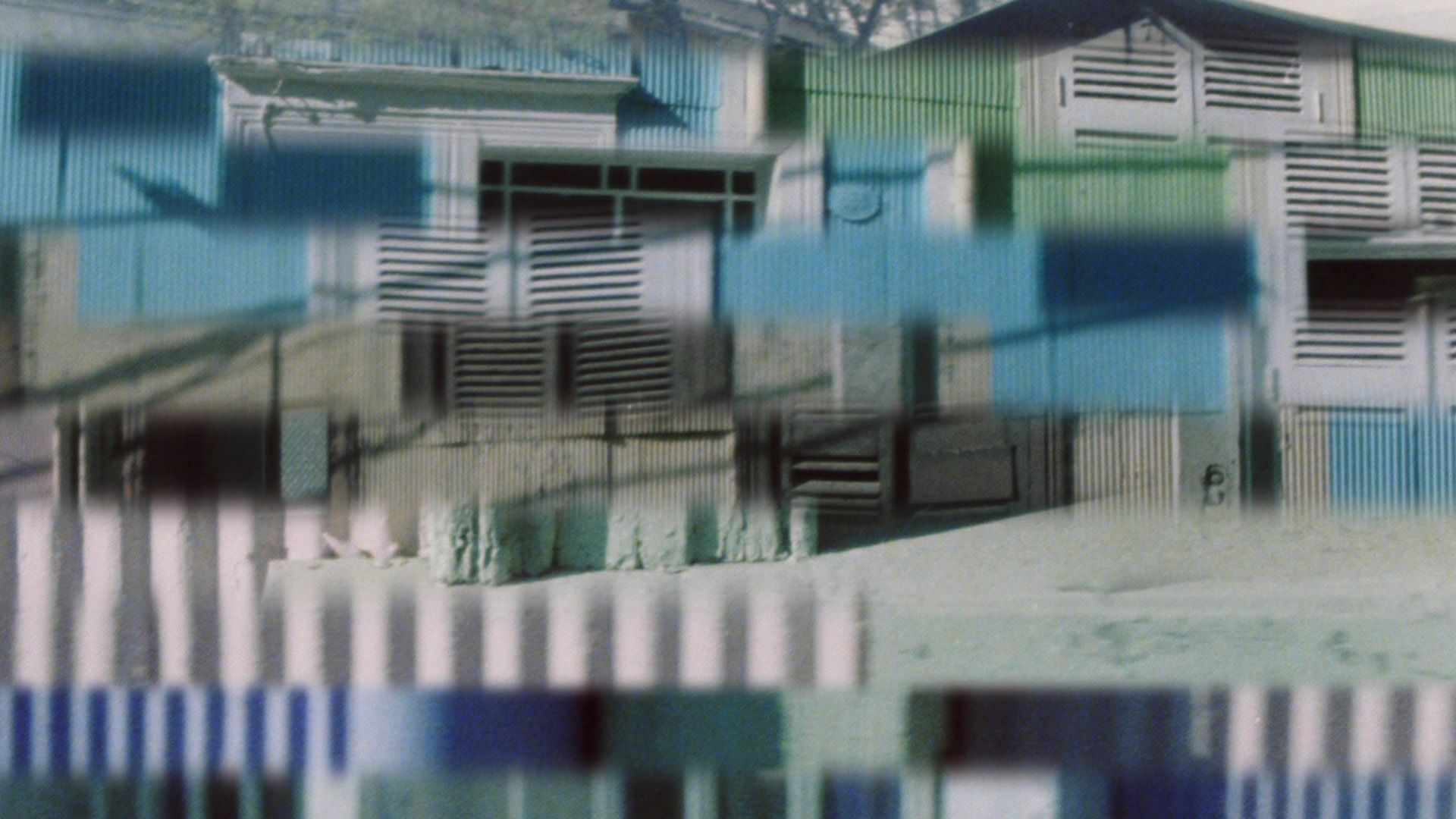 A city of brick, tin and board, rent by internal tectonics and sliding into the sea. 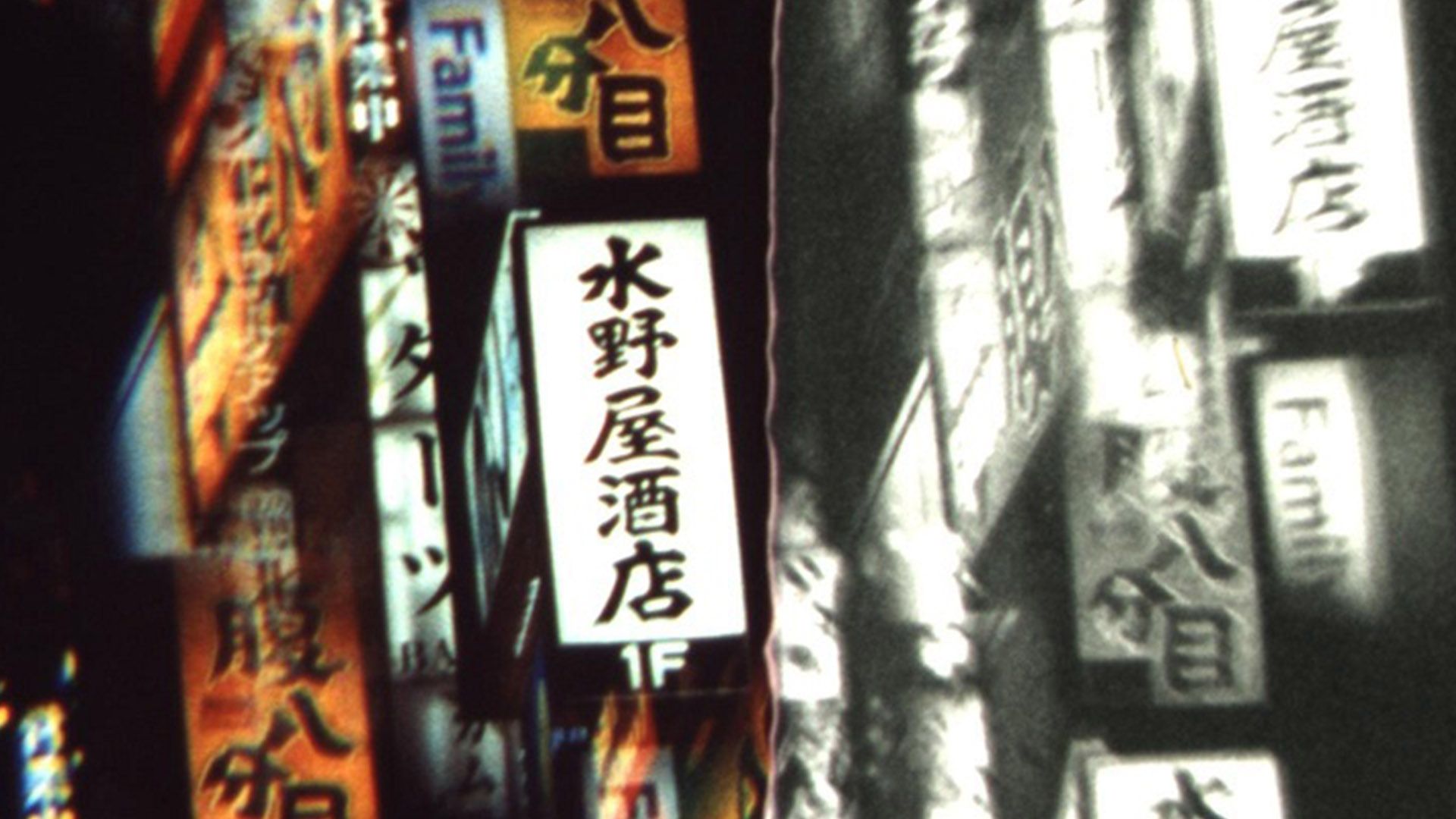 The Ginza of fable and memory. This is the first film I have finished using the ‘chromaflex’ technique that we developed. This is a very much hands-on colour developing procedure that allows selected areas of the film to be colour positive, colour negative, or black and white. (Richard Tuohy) 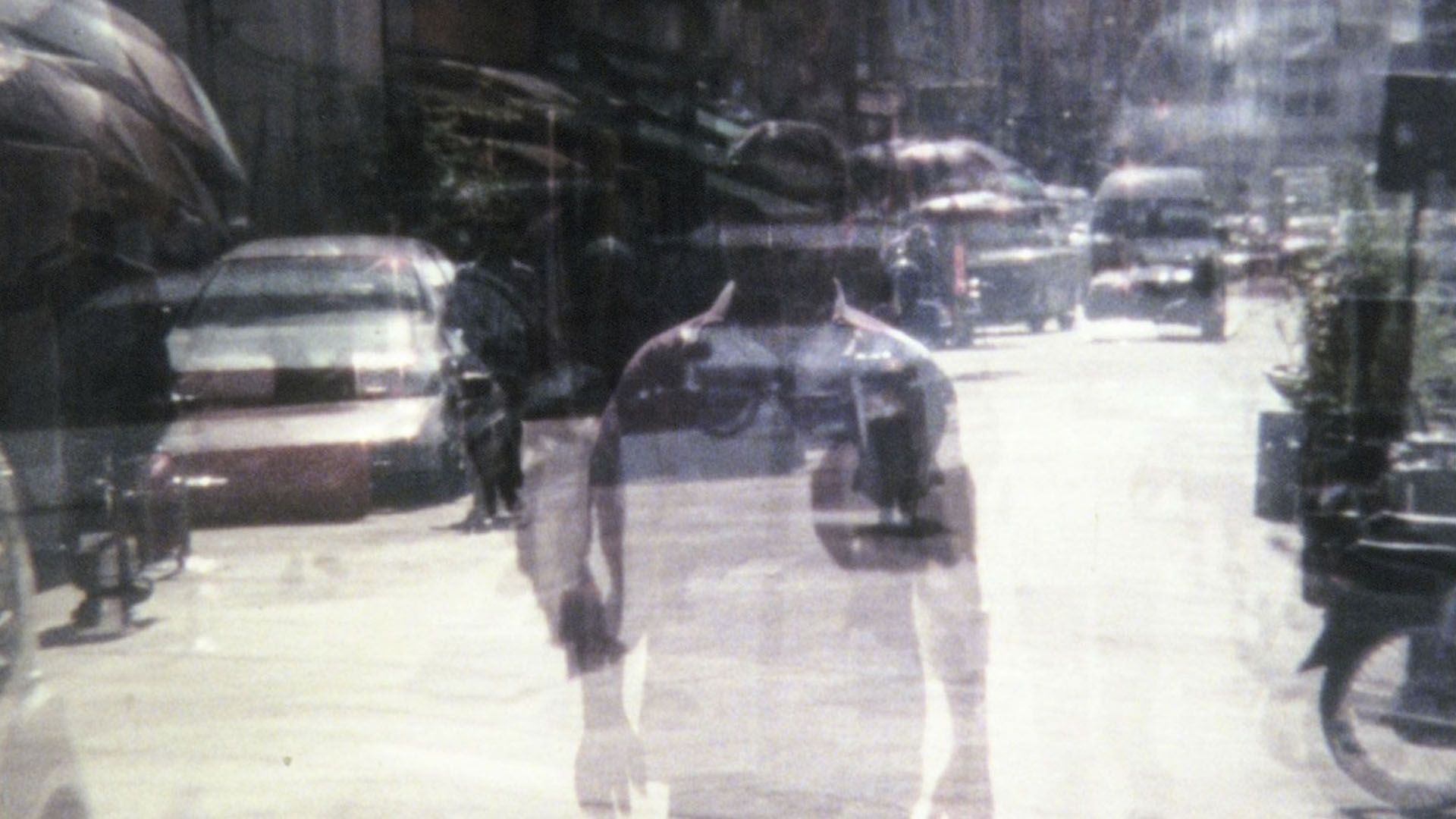 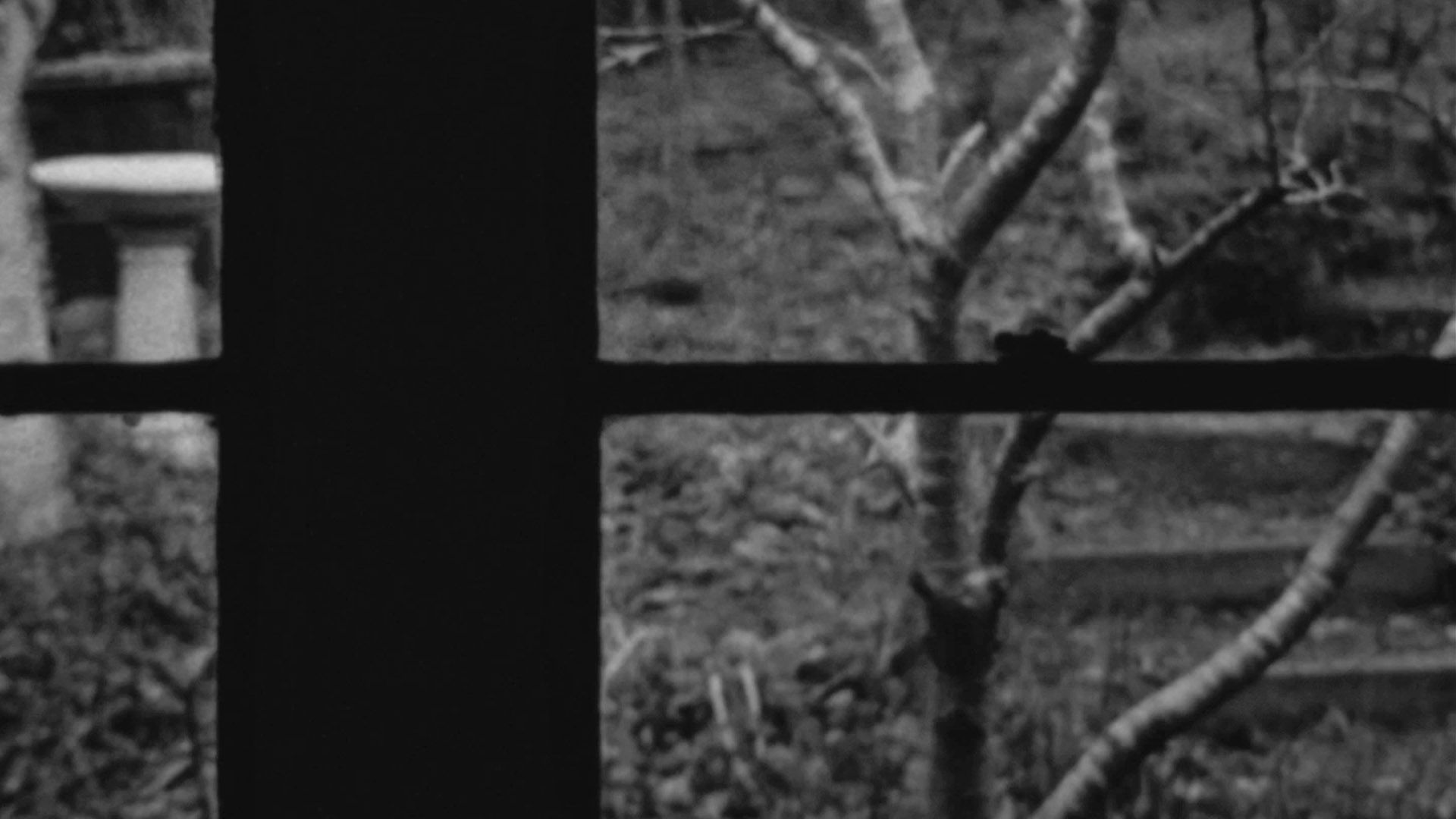 Our front window, from inside and out. Filmed during the COVID lockdown. (Richard Tuohy and Dianna Barrie) 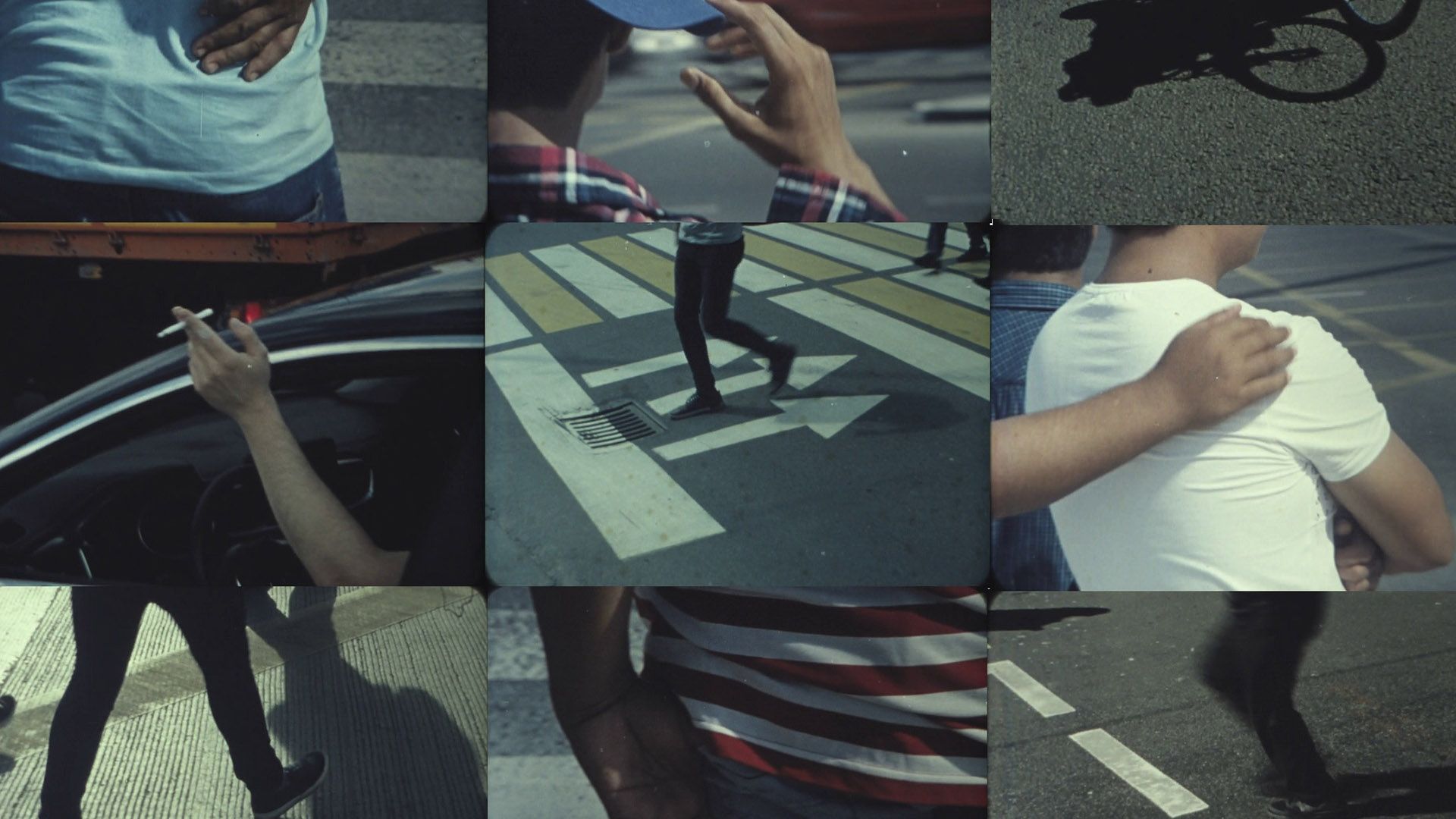 A staccato study of street-level action and inter-action. People and vehicles on everyday journeys are atomised into coursing fragments of light, shadow, angle and inertia, reiterating and disassembling the creation of motion out of still frames at the heart of cinema. Filmed in ten cities on four continents.

All films are a kind of patchwork made up of pieces filmed or created by hand, “stitched” together in editing the montage. In the case of the films by Richard Tuohy and Dianna Barrie, however, the process is more akin to weaving a tapestry: instead of juxtaposing them, these captured patches are intertwined like the warp and weft on a loom, thus creating (with the intervention of the machine) a set of images and motifs only possible thanks to patient craftwork. It all begins by gathering images of the world: many of their films are based on the observation of places and their paces. Many of them could be thought of as travel notebooks or “city symphonies”. But simple things become complex thanks to a thought whose formal clairvoyance identifies and isolates the compositional, kinetic, chromatic and rhythmic patterns of what is filmed. These patterns thus become the raw material to be processed by analog machinery, creating complex, sophisticated works around apparently simple themes.

Some of the formal strategies they use are repetition and variations (resources used profusely in music), superimposing images, a collage made from dividing the frame into sections thanks to the optical printer, and frame-by-frame work. These are procedures whose infinite combinatorics have been honed and mastered, and whose nuances are refined with every new exercise.

The work of Tuohy and Barrie can also be interpreted as a conjunction of heterogeneous interests: the musical structure of many of their films (Barrie comes from the sphere of abstract music) coexists with the graphic work with elements of the frame (the lines, the areas of light and shade, the directionality of movements). Both Barrie and Tuohy have also studied philosophy. And without a doubt, the unfolding reality that they put forward, the vision beyond the obvious brought about by the subsequent re-working, can be connected with philosophical thought. New ways of thinking about the world emerge from analogue filmmaking, which generates the discoveries and accidents typical of organic manual work that always entails some extent of unpredictability and surprise. The intimate knowledge of the machinery and photochemical processes, as can be seen, is one of the fundamental pillars of their cinema.

This know-how is one of Tuohy and Barrie’s hallmarks in their travels around the world “spreading the word” of artisanal and analogue cinema. Originally from Melbourne, Australia, they founded the now famous nanolab in 2006, which began as a Super 8 development laboratory based out of their own home. The lack of laboratories in Australia was what spurred Tuohy and Barrie to roll up their sleeves and take matters into their own hands, also taking advantage of the forced obsolescence of photochemical formats to equip themselves with all kinds of apparatus. It was a search that also led to the invention of DIY techniques that they disseminate via the workshops they give all over the world. In our 2020 edition, we enjoyed an online workshop with Tuohy and Barrie, which this year they can finally give in person. In 2011 they founded the Artist Film Workshop, a laboratory that is growing with more members. This is part of the international network of self-managed laboratories in which screenings also take place. It is an epicentre of experimental cinema in Australia. They are also the founders of the Australian International Experimental Film Festival. As movers and shakers of the local scene, spreaders of knowledge and international artists, they both work tirelessly around the unexplored possibilities of cinema that one can touch.

The set of films that we are presenting (together with the film performances in the Desbordamientos section) offer a succinct tour of their work, and also create an experience whose rhythms and progressions bring on a hypnotic, meditative state. Etienne’s Hand (2011) takes the movement of a hand and isolates it. The repeated gesture (accompanied by the tinkling sound of an old lullaby from a music box on a loop) is captured in different phases, recombined, superimposed, inverted and multiplied, in an exercise transcending pure formalism. It is a hand that opens, with all of its mysterious and intimate suggestions: manual work, the caress and the magical, primary gesture. From the point of entry of the inviting hand, we travel to faraway places. Valpi (2019) takes us to Valparaíso, Chile, by the sea and in the shadow of a volcano, with its particular uphill architecture in endless rows of multicoloured houses. Barrie and Tuohy film what seems like an infinite tracking shot on a car or streetcar and break it down in the optical printer into horizontal strips. The movement takes a break, the landscape is recombined at the uneven pace of the camera’s advance in each section, and we discover or recognise the space that at times turns into abstraction and at times “fits” into a recognisable form. With Ginza Strip (2014), we enter the Ginza district in Tokyo. The bustle of people passing by, the tall buildings and the illuminated signs immerse us in the incessant movement of the Japanese capital, this time using vertical and diagonal strips that sweep across the frame and weave images, circles and flickering superimpositions, in a striking combination of positive and negative in colour, achieved thanks to a technique invented by Tuohy called “Chromaflex”. Thanks to this technique, the colour and black-and-white positive and negative are processed in such a way that they coexist in the same image. The interweaving in Blending and Blinding (2018) works thanks to the overlays. In this piece, shot in Malaysia, the stripes of window blinds are combined in complex patterns with floor tiles and latticework, buildings and arches, in a play of geometry that unfolds before our eyes as we travel through the geography of the place. There is an architectural essence that seems to also speak of a culture’s ancestral roots. The physical journey had to be replaced by the photochemical-metaphysical journey during lockdown: this is what happens in In and Out a Window (2021), in which the main motif is a window, accompanied by a tick-tock (which may be the timer for a developing room) that evokes the slow passing of time. The simple image of the outside world, of dense vegetation, is cut into four by a window from a completely black interior. This image is recombined frame by frame, rotating and zooming in and out until it becomes an abstraction, going from three-dimensional to two-dimensional and creating stroboscopic effects. The tour ends with one of their last pieces, Tiny Collisions (2022), in which we return to the outside world: the streets of ten cities on four different continents are the ones that are interwoven this time in the frame formed by the skillful hands of Tuohy and Barrie, in lucid harmony with the machines and processes of filmmaking.